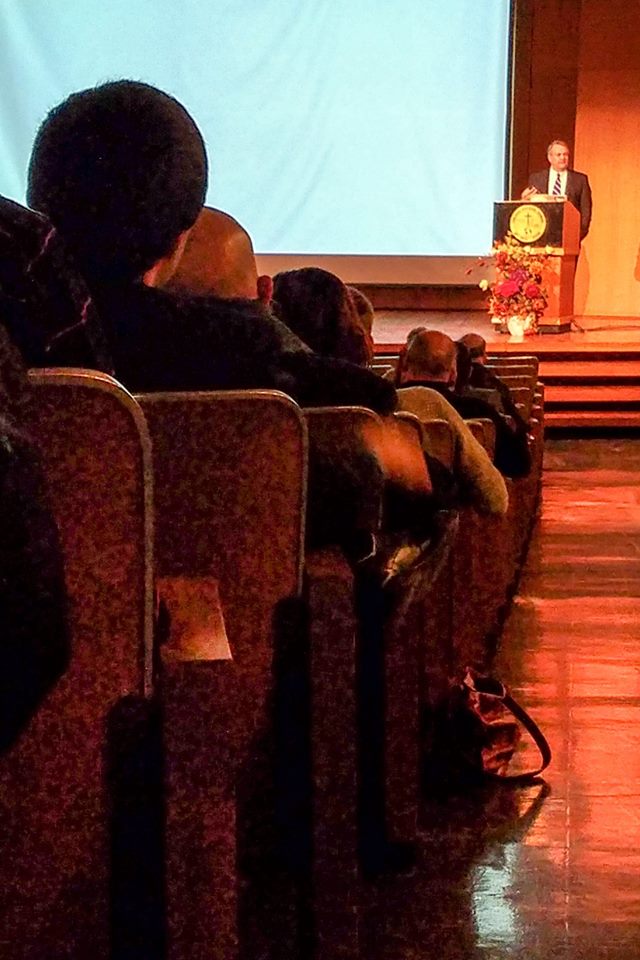 Once a quarter, President Rast holds a “Collegial Conversation” for all MDiv and Deaconess students in Sihler Auditorium. These conversations tend to contain practical advice, based in Scripture, for those anticipating a future in service to the Church and her members. Afterwards, students get together with their faculty mentors to discuss the day’s topic over lunch.

With Call Day exactly five weeks from today, this morning’s talk focused on pastoral and diakonal wisdom when serving and engaging with God’s people. “Learning to be a leader of a community joined together in confession but not always in action can be a tremendous challenge,” President Rast acknowledged. He turned to Titus chapter 1, where Paul explains that pastors “must hold firm to the trustworthy word as taught, so that he may be able to give instruction in sound doctrine and also to rebuke those who contradict it…[the defiled and unbelieving] profess to know God, but they deny him by their works. They are detestable, disobedient, unfit for any good work” (verses 9 and 16).
‍‍‍‍‍‍ ‍‍
“But when do you become convinced they have crossed that line: ‘detestable, disobedient, unfit for any good work’?” President Rast asked. “When you recognize that YOU are detestable, disobedient, and unfit for any good work. You and I are unfit too. You will learn – I hope – to say at the end of the day: we are unworthy servants.”
‍‍‍‍‍‍ ‍‍
Always a historian, near the end of his talk Dr. Rast included these words from C.F.W. Walther’s first speech as president of the Synod (1848):
‍‍‍‍‍‍ ‍‍
“But where the pastor is given only the power of the Word, but its full power, where the congregation, as often as it hears Christ’s Word from the mouth of the preacher, receives it as the Word of God, there the proper relationship between pastor and congregation exists; he stands in their midst not as a hired mercenary but as an ambassador of the Most High God; not as a servant of men but as a servant of Christ, who in Christ’s stead teaches, admonishes, and reproves…
‍‍‍‍‍‍ ‍‍
“The more a congregation sees that he who has the rule over them in the Lord desires nothing but that the congregation be subject to Christ and His Word; the more it sees that he does not desire to dominate them, yes, indeed, that he himself with a jealous eye guards the liberty of the congregation, the more willing the congregation will become to hear his salutary recommendations also in matters which God has not prescribed; it will follow him in these matters not as a taskmaster because it must, but as their father in Christ, because they wish to do it for their own advantage.” 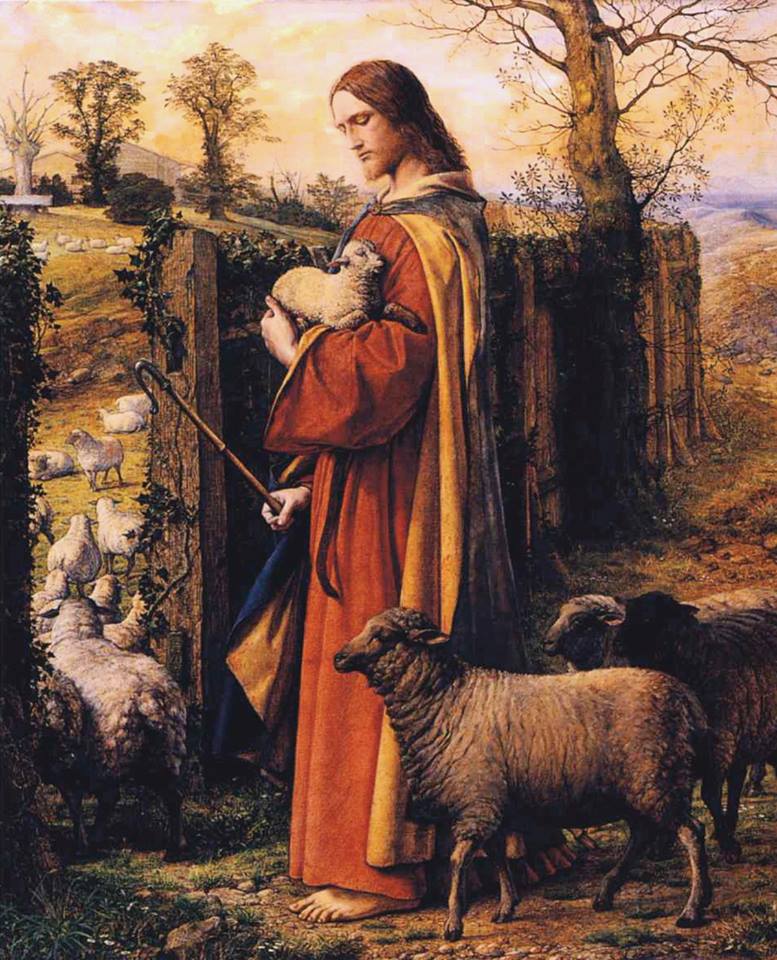 Today, as we remember St. Joseph, guardian of Jesus, we also remember our pastors, those faithful shepherds whom God has raised up for our good. Every year around Lent we send out cards of appreciation to our alumni, and we wanted to share that message of thanks and encouragement from President Rast:

Two thousand years ago the Son of Man poured out His blood
for us, the foolish sheep who so often and easily go astray. Jesus knows how much and often we need tangible reminders and reassurance when we are perplexed with our griefs and doubts as was Thomas. “Jesus came and stood among them and said, ‘Peace be with you.’ Then he said to Thomas, ‘Put your finger here, and see my hands; and put out your hand, and place it in my side. Stop doubting and believe’” (John 20:26b-27, ESV).

The Good Shepherd continues to reassure you of your value and purpose as He pours out His forgiveness through His sacrificial body and blood in the Lord’s Supper.

I wish to remind you of how much I appreciate your tireless
efforts in sharing the good news of salvation in Jesus, the crucified and risen Lamb of God. As you feed His sheep, call back into the fold those who have gone astray, and share works of mercy, please pray for your Seminary so that God continues to raise up faithful shepherds and workers for His Church.

Thank you for your dedication and faithful service. 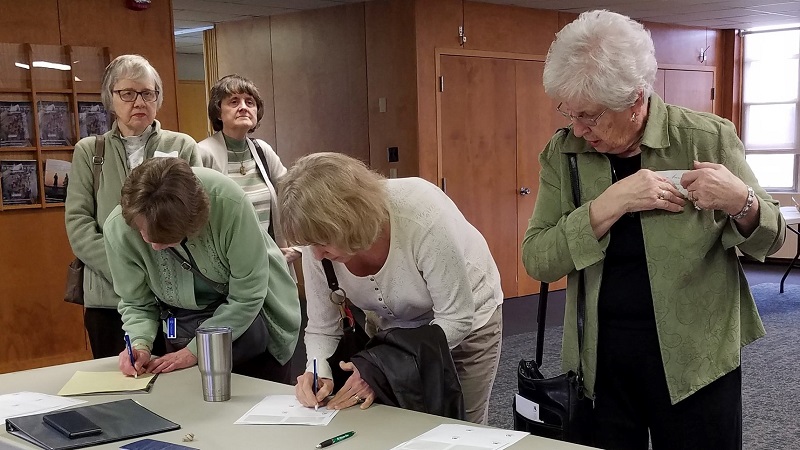 As the ladies of the Seminary Guild sign in for their monthly meeting, by the colors of their coats you can tell that we’re approaching both spring and St. Patrick’s Day. Today their meeting focus is on international students, with Dr. Quill, the director of International Studies, guest speaking.

The Seminary Guild will meet one last time for this academic year, on April 10. Meetings will resume next fall, though the work itself doesn’t ever truly take a break. They are a source of encouragement and care to our students, hosting receptions, providing food and coffee during finals week, remembering birthdays and welcoming new babies with homemade clothing, not to mention their ongoing student projects. These are the Tabithas of our community “full of good works and acts of charity” (Acts 9:36).

It’s been a quiet two weeks on campus, but spring quarter is nearly upon us and we’ll be busy again very soon. Chapel will resume this coming Monday when all the students have returned, and two days later we’ll have a new set of visitors here on campus for the Prayerfully Consider Visit.

We host this event twice a year, as a chance for those interested in becoming a pastor or deaconess to take the time to seriously contemplate these vocations. Attendees go to class, worship in Kramer Chapel and otherwise follow the same schedule as our current students, to receive a taste of what life is like as a part of the CTSFW community.

The visit lasts only a couple days (March 14 -17), and there are no costs, save for what it takes to get here. Prospective students live on campus, eat in the dining hall and are encouraged to bring their spouses (also at no cost), as they’re an integral part of the decision making process for anyone considering returning to school and pursuing a future in church work.

For more information, visit www.ctsfw.edu/PCV. Registration is available on this site as well. 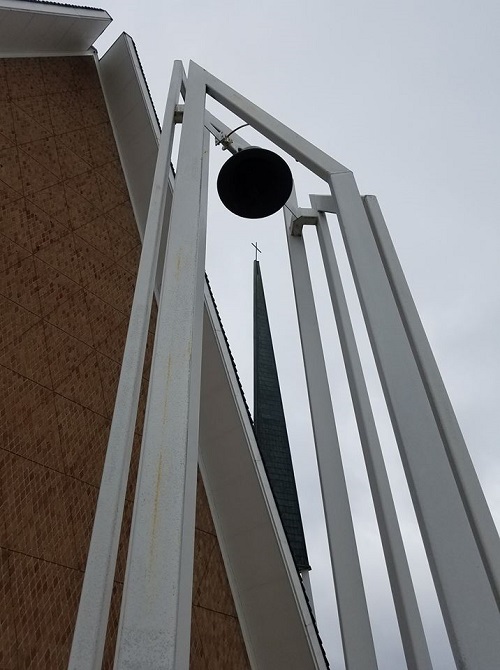 Here’s an underside view of both of our bell towers. In the background, the 1,320 pound bell that rings every day for chapel can’t quite be seen behind the chapel roof, while the bell in the foreground will see a lot more action come May. This bell (called the Springfield Bell) was originally cast in 1882, moved to Fort Wayne in 1976, was found in storage in 1984, and finally hung and dedicated in its newly constructed tower in 1994.

Graduating students ring this bell after finishing their final class, celebrating their release.