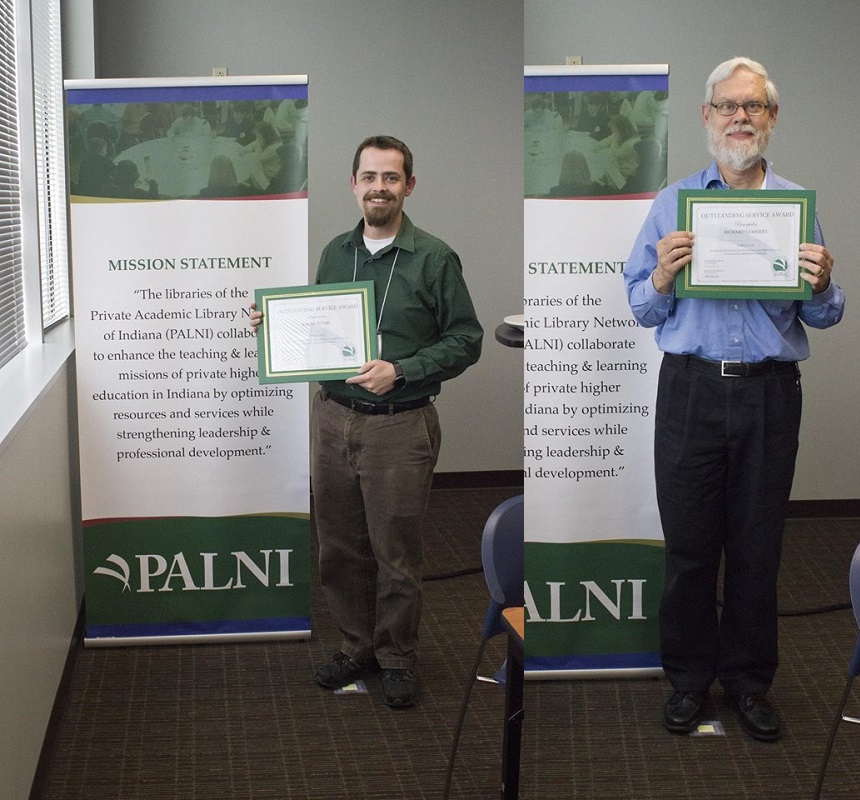 Two of our librarians, Rev. Richard Lammert (right) and Rev. Roger Peters (left), both graduates of CTSFW and part of our ordained staff here, were honored by the Private Academic Library Network of Indiana (PALNI) back in June. When I asked what outstanding services they were being awarded for (the news release from PALNI simply said “Support of Bethel and Saint Mary’s WMS Implementation”), Rev. Peters was good enough to send me the following explanation on behalf of both men:
‍‍‍‍‍‍ ‍‍
“We were just discussing how best to answer your question without writing a whole essay. I think this will capture all the important details:
‍‍‍‍‍‍ ‍‍
“The Wayne and Barbara Kroemer Library is a member institution of PALNI, which supports 24 libraries with a shared Integrated Library System (among other things) known as WorldShare Management Services (WMS). During the first half of 2018, PALNI gained two new member libraries, Bethel College and Saint Mary’s College, who then needed to implement WMS in order to take part in PALNI’s shared resources. Librarians from several PALNI libraries assisted in this implementation in various ways, according to the skills those librarians brought to the table. Rev. Lammert assisted with data migration and was therefore a key member of the team. I assisted by helping to demonstrate how group circulation and other resource sharing methods work within PALNI and WMS.
‍‍‍‍‍‍ ‍‍
“I think that just about covers it. I won’t bore you with the details of data migration or group circulation. If you want the TLDR version, you could just say we helped two libraries new to PALNI get up and running with the new library system.”
‍‍‍‍‍‍ ‍‍

For those of you unfamiliar with internet chat acronyms, TLDR stands for “too long; didn’t read.” So in short: the CTSFW staff members continue to serve our neighbors, whomever they may be. Congratulations for the well-deserved recognition to those who spend their days working quietly behind the scenes!