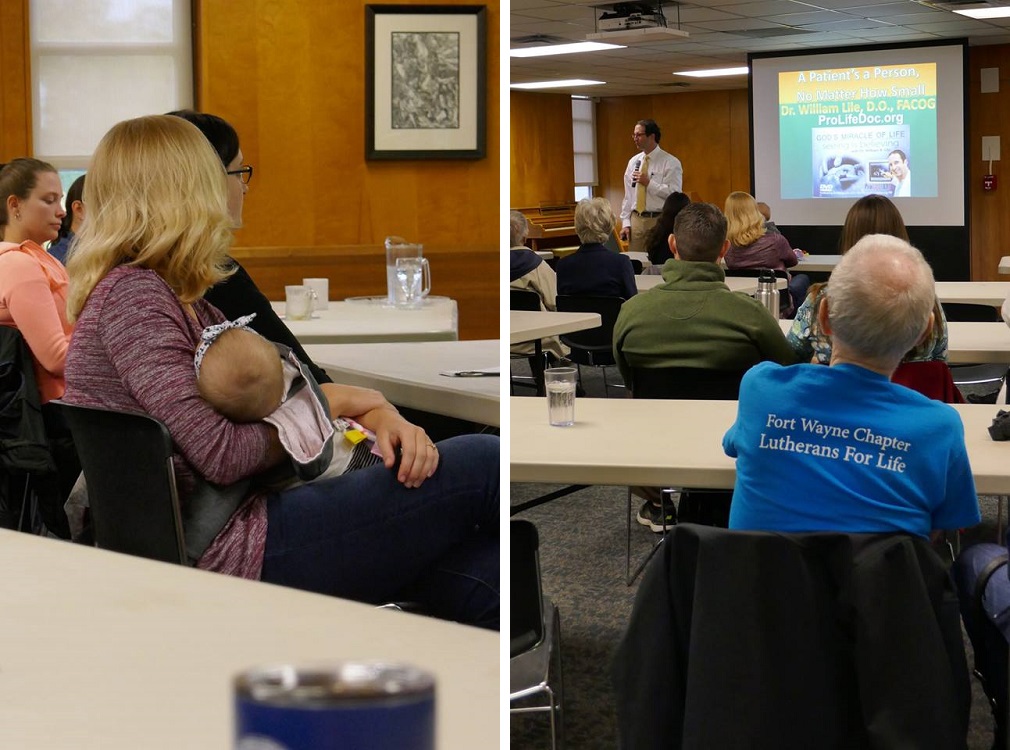 During today’s convocation, Dr. William Lile, OB/GYN from Florida, spoke on the topic of life issues as they pertain to abortion. Dr. Lile has served as both Chair of a hospital and instructor at a university and in a medical school. From his website www.prolifedoc.org:

“In 1999 he took over a practice that was also the largest provider of abortion services in Pensacola. All abortion services and abortion referrals were stopped on day 1. The abortionist retired and left the country. The abortion equipment is now used to demonstrate the brutality of abortions performed in all 3 trimesters. The tools of modern obstetrics are used to demonstrate the life and personhood of the unborn. Babies in the womb are viewed as patients, abortion is never the right ‘choice’, and forgiveness is available to ALL through the blood of Jesus Christ.”

He spoke on the subject especially in light of the fact that the preborn (as he refers to babies in the womb) are viewed and treated, in his profession, as patients. If they’re patients, then that means they’re persons. And if a person, then they deserve protection.

Dr. Lile was born into a Christian family, whose parents taught him pro-life values. After he finished his residency, the OB/GYN took over a practice in the Pensacola area that also quietly operated as the largest provider of abortion services in the area, and had since the 70s.

From that day, the abortions stopped. There was no major backlash in the community (much like the concentrations camps in WWII, people turn their eyes away and do not look), and he realized that many people didn’t know what was going on behind those doors, once you walked up the stairs to the second floor. He now uses the equipment left behind to demonstrate the brutality of abortion.

Though his most well-known presentations involve these demonstrations (his first presentation was at his own church, but now he’s a nationally renowned speaker and his YouTube videos have hundreds of thousands views, which you can find by searching for “Lile abortion” and “abortion demonstration”), today he spoke primarily on chemical abortions and, borrowing from Dr. Seuss, that “A patient’s a person no matter how small.”

Chemical abortions are largely unreported, which he calculated amounted to 20% of abortions that are being done. The two main abortifacients are RU486 (a progesterone blocker which, by blocking the hormone that tells your body it’s pregnant, induces a menstrual cycle), and methotrexate, which is used in the treatment of cancer to attack rapidly dividing cells. It is 98% effective.

Reversals are now possible for both of these chemicals. So far, over 100 abortions have been reversed by flooding the body with progesterone following the ingestion of RU486, and a paper has been published and accepted on the findings, which means that ERs can now tell patients about the reversal option if they come in and ask for an abortion reversal.

As to the methotrexate, only four reversals have been done in the world. Dr. Lile performed one of them. An engaged couple were talked into an abortion after going to Planned Parenthood for advice, and both were hit with deep regret as soon as they got back to their car. The young woman was a nursing student, and when they got home she immediately began googling abortion reversal and was then connected to Dr. Lile (who lived in their area) through the website www.abortionpillreversal.com. He called around to the pharmacies in the area, and finally found one carrying the drug he needed.

When he explained the dosage and directions, the pharmacist suddenly got suspicious. “Are you trying to reverse an abortion?”

He hesitated, but decided he needed to be bold. “Yes I am.”

“Oh sweetie, I’m going to take care of her.”

He wasn’t entirely sure what that meant, but the young woman got her prescription just fine. The next day, when she spoke with him, she explained that he had sent her to the strangest pharmacy she had ever gone to. The pharmacist had come out from behind the counter and given her a hug. “And,” the young woman added, “the pharmacist had paid for the medication herself.”

Dr. Lile then spoke on the treatment of the preborn, which makes them patients and thus persons. This isn’t new; prenatal testing began in the 60s, not to look for reasons to abort but to diagnose problems and treat them. Now the medical capabilities are incredible. These include prenatal blood transfusions, intrauterine medications (injected directly into the amniotic fluid so as not to affect the mother), and fetal cardiac surgery at 20-22 weeks gestation.

In fact, if a doctor fails to diagnose these developmental issues in the preborn, then he can be sued for millions of dollars for failing to save the baby. So clearly there is recognized value there.

Delayed Interval Delivery. It has happened that two identical twins were born months apart – one in June and the other in August (early delivery, had to live in the NICU; kept the other baby in mother’s womb, which is an even better, more effective NICU; “It’s not ‘your body,’” Dr. Lile pointed out. “’Your body’ is an amazing life support system” for another’s.).

But according to Washington D.C. and the eight states that do not put a cap on gestational age for abortions, one identical twin has rights and protections while the other doesn’t. Because of location, the purposefully caused death of one twin would be murder, and the other a legal termination of a pregnancy.

Dr. Lile took questions after the presentation. Dr. Fickenscher asked how his fellow doctors could perform surgery with one hand and abortions with the other, as is so often the case.

“You’ve got to have a cold heart,” Dr. Lile answered. “It’s not a choice. It’s a spiritual battle.” It’s not the first time in the history of the world that we’ve sacrificed children on the altars of idols. ““Why do I do this?” he added, speaking of his presentations and his passion for the pro-life movement. “Because it’s my peers performing these abortions.”

Dr. Grobien asked what the church’s future workers could do – her pastors and deaconesses – to assist in the battle.

“Talk about it in church,” he said, finding that many people have never heard their pastor speak about abortion from the pulpit. Since it’s a spiritual battle, he spoke on how our weapon in this fight is the Word of God. He also touched on a life apologetics course for men (to both minister to their own losses as well as to educate and train them as they are meant to be the defenders), which he held in Pensacola. Dr. Lile’s main message:

Is abortion a sin? Yes.
Is it an unforgivable sin? No.

A man came up to him afterwards, to tell the story of his first grandchild. Years ago the man had taken his pregnant, 17-year-old daughter to the clinic (in fact, the very clinic which Dr. Lile later took over) for an abortion. He briefly saw his first grandchild on the ultrasound, a sight which did not stop him from paying to terminate the pregnancy, but one which has haunted him since.

His first grandchild and, as it turns out, his only grandchild. “Oh, I have paid for it,” he said to Dr. Lile. Since then he’d also felt that he could never go to God to ask for forgiveness because it was such a vile sin. But that simple, scriptural message (Is it unforgivable? No.) drove him to repentance. His burden was lifted.

“For if you keep silent at this time, relief and deliverance will rise for the Jews from another place, but you and your father’s house will perish. And who knows whether you have not come to the kingdom for such a time as this?”
(Esther 4:14)
‍‍‍‍‍‍ ‍‍
Behold, I was brought forth in iniquity,
and in sin did my mother conceive me…

Hide your face from my sins,
and blot out all my iniquities.
Create in me a clean heart, O God,
and renew a right spirit within me.
Cast me not away from your presence,
and take not your Holy Spirit from me.
Restore to me the joy of your salvation,
and uphold me with a willing spirit.
(Psalm 51:5, 9-12)