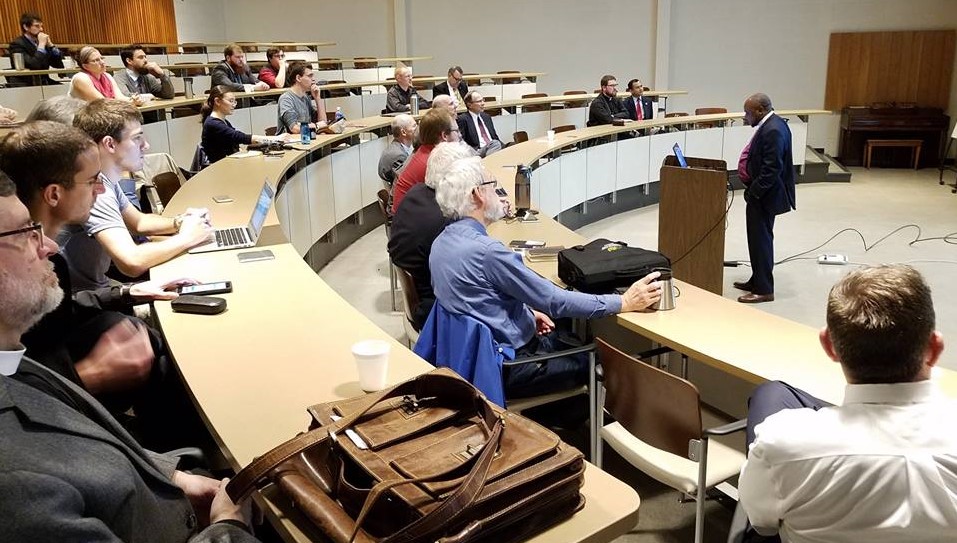 For the 501st Anniversary of the Reformation, the Rev. Peter Anibati, Bishop of the Evangelical Lutheran Church in South Sudan/Sudan (ELCSS/S), spoke during today’s convocation hour on “Bringing the Reformation to South Sudan: Pastoring through Civil War, Famine, and Spirit Worship.” Bishop Peter is here at invitation of the Lutheran Heritage Foundation (LHF), who have been instrumental in the support of the ELCSS/S.

The 150,000 members of the ELCSS/S are scattered across five countries, refugees of the civil and tribal wars that plague South Sudan. The church body came into existence in 1993 (they will be celebrating their 25th anniversary on December 2), in the midst of the Second Sudanese Civil War between the Muslims of the North and the Christians in the South (fighting back against forced Islamification). Though South Sudan has since been granted independence, their politicians still fight, killing each other – and the people of South Sudan – over power.

The South Sudanese are dominated by constant fear, hunger, and poverty. Millions have died in the decades of armed conflict. They have no access to basic services like shelter, food, clean water and sanitation, health care, and education. More than 80% of the population is illiterate. The fighting has driven the people from their homes, their ranches, their farms; Bishop Peter spoke of watching little children climb trees in order to eat the leaves. South Sudan has two planting seasons but there’s no point in sowing what no one will be around to harvest. “It’s all gunshots and killing,” Bishop Peter explained.

The impact of warfare is profound. The ELCSS/S’s 150,000 members across 200 congregations are served by 66 ordained pastors, none of whom work for a salary. They are, in many ways, volunteers. Traveling by foot or on bicycles (save for those lucky few who own a motorbike), these pastors visit congregations only once every two to three months, at which time the congregation is finally able to receive the Lord’s Supper and baptize and confirm new members. Between pastoral visits, congregations are served by trained laypeople called evangelists.

These 66 ordained men visit congregations across South Sudan and in Uganda, Kenya, Ethiopia, and UN protected refugee sites. While on the road they always wear collar and cross, so that the people know they are neither a rebel nor a politician but instead recognize them as men of God. Some have been killed anyways. The people may know who these men are but, as Bishop Peter explained, “The bullet doesn’t know anyone.”

Oftentimes, members or even whole congregations have to run as the fighting shifts into their area. Their pastors run with them. There is no permanence in Sudan; no one knows where they may be tomorrow. “The church is not a building,” Bishop Peter said, showing a picture of a congregation gathered under the shade of a tree. “It is the people.”

To help alleviate the lack of pastors, the ELCSS/S has started a seminary which ordains men through a four-year program like ours—three years of academic study and one year of vicarage. Twenty-two men are in the program. The ELCSS/S is also working on training Sudanese pastors to become professors since they are currently dependent on visiting professors (our own faculty among them) to teach their seminarians.

What they have in financial support has largely come from the United States. In a church body made up of refugees and the survivors of war, they must reach out to their brothers across the sea for help. “Without the Lutheran Heritage Foundation,” Bishop Peter said, “it would be almost impossible to have all this happening.” The church depends on members to give, but their members have nothing. Instead, the people of South Sudan reach out to the church to come to their rescue.

And herein lies the strength promised in weakness. It is this “nothing” that has caused the ELCSS/S to grow and thrive. “There is great demand for the Gospel message because all else has failed the people of South Sudan,” Bishop Peter said. “The membership has increased greatly. The Good News is spreading.”

To start a congregation, the ELCSS/S begins by identifying a place where there is no Lutheran church. They then hold a 2-3 day seminar in the area, using LHF translated materials (books like Luther’s Small Catechism and “The Good News About Jesus”). Many already know the Lord’s Prayer, but they have never heard an explanation for it. “This catechism is a very powerful tool,” the bishop said, explaining that as soon as the people hear or read these resources in their language, they grow excited and want to learn still more. A congregations begins because, having learned of the truth of the Gospel, they desire access to it.

Bound by the biblical teaching of grace alone, the ELCSS/S has a powerful message that resonates with a people broken by war and desperate need. “People try to look for something that can give them hope. They ask, ‘Why is this happening?’ Traditional religions – all other religions – can never give. All they do is demand, demand, demand. But what can a refugee really do?” Bishop Peter asked. Refugees have nothing. Literally nothing. And for those sitting in darkness: “Christ on the cross has given all. This is what comforts them.”

Thousands have been drawn to the ELCSS/S by the power of the Gospel message. “God works through the Word,” Bishop Peter explained. “The Word is powerful. We just speak what is there. We don’t know how it works. But God knows.”

Bishop Peter finished his presentation with these words:

“In all these, the Word continues to spread and the church is growing. Our government and politics may have failed but Jesus is the only hope. With Him we are secured and have life in abundance even in the face of suffering, poverty, death and war.

“Thank you and God bless.”‍‍‍‍‍‍ ‍‍

You can learn more by visiting www.lhfmissions.org or by contacting the Lutheran Heritage Foundation at [email protected] or (800) 554-0723.