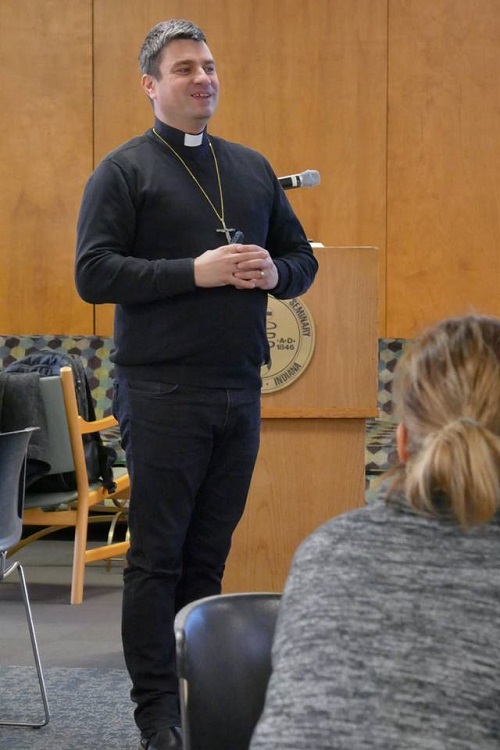 One of the students with us for two weeks of graduate intensives was Rev. Sorin-Horia Trifa, studying for his Masters in Sacred Theology (STM). Rev. Trifa is the only pastor of The Confessional Lutheran Church in Romania, and an LCMS Alliance Missionary. The Student Mission Society invited him to speak about his home country, for which he has a deep love. “I saw [the Romanian flag] also here,” he said, pointing in the direction of the library, where we keep flags representing all the nations of our current students, “and I am very proud.” About 92,000 square miles with 19.6 million people, Romania is barely 100 years old, the result of the merging of three countries: Transylvania, Walachia, and Moldavia.

To understand Romania is to understand her history, particularly that of Transylvania. “Transylvania is important to the understanding of the whole country,” he explained. Rev. Trifa comes from the Transylvania part of Romania, though he had to move to Bucharest, the capital, to best serve the Romanian people. He grinned as he informed the audience: “Transylvania is very beautiful, and it is more than Dracula.”

First conquered by the Roman Empire in 106 A.D. (Romanian is still closely related to Latin as a language), for centuries, Transylvania was part of the Kingdom of Hungary and the Austrian Empire. Because it was constantly under the threat of Turkish invasion, the Habsburg and Hungarian empires sent Germans and Hungarians to defend the border, which is why Romania is still home to three major ethnic groups: Romanians, Hungarians, and Germans.

However, the country changed hands at a very important time. In 1526, the Ottoman Empire defeated the Kingdom of Hungary and declared Transylvania an independent state, simultaneously banning any form of religious persecution. The country became a beacon for persecuted Lutherans. A former student at Wittenberg, Johannes Honterus, opened a printing press to begin distributing Lutheran materials, beginning the Lutheran Reformation in Transylvania around 1543. First the Germans, then the Hungarians, embraced the reformation. In fact, in 1568, the multi-ethnic and multi-religious country (Catholicism persisted and Calvinism inspired some of the Hungarians to join the Reformed Church) proclaimed freedom of conscience and religious tolerance at the Diet meeting at Turda, becoming the first country in modern European history to create such an edict.

In 1699, control of Transylvania turned back over to the Austro-Hungarian Empire. Over 200 years later, the Transylvanians declared their independence from the Empire at the end of WWI, joining the Principality of Romania (the principality had been formed by the unification of Wallachia and Moldavia, who got around a ban on their unification by electing the same king) on December 1, 1918 to become the Kingdom of Romania. Romania was ruled by a German dynasty until the end of WWII.

A very dark period in the country’s history soon followed: the Soviet Union punished Romania for being on the side of Hitler, brutally and decisively. Their King was forced to abdicate and a Stalinist government took over. “Romania was vandalized—this is the word—” Rev. Trifa said, “—by the Soviet Army.”

Hundreds of thousands were imprisoned, exterminated, tortured, deported, and starved for being enemies of the people. “Who was this ‘enemy of the people’?” Rev. Trifa asked. “Those who believed in God and go to church.” Among them were Catholics, Lutherans, Reformed Christians, Baptists, Pentecostals, and Seventh-Day Adventists. Their obedience to God threatened their obedience to the communist regime.

Dozens of thousands of believers among these groups were forced to join the Orthodox Church, but religious holidays like Christmas and Easter were banned. Owning a Bible could get you sent to prison for years. Their churches were demolished, and thousands of priests and pastors arrested, tortured, and killed. “The list is huge,” Rev. Trifa said, showing the pictures of several of these men, after telling us their names and their church body. “We have no time to tell all of them here.”

“People went to the Church in secret, baptized in secret, prayed and read the Scriptures in secret,” he continued in his presentation slide, next to a painting of Christ in prison. If your activities were reported, the entire family would be terrorized by the police. “Not kill but re-educate, if you know this word,” Rev. Trifa explained. He spoke personally of his father’s mother, who had been imprisoned for two years in order to terrorize others. She was so terrified that, even after the Soviets left, she refused to talk of her family or her home from before her arrest. Rev. Trifa’s history on that side of the family begins with his grandmother, their genealogy cut off. They never found it if she even had siblings.

~~~
With the stage officially set, we will tackle the second half of Rev. Trifa’s presentation tomorrow afternoon, from the state of the newly formed Confessional Lutheran Church in Romania (begun in the fall of 2016) to how the history of the country has shaped the challenges—and the opportunities—for confessional Lutheranism in Romania.