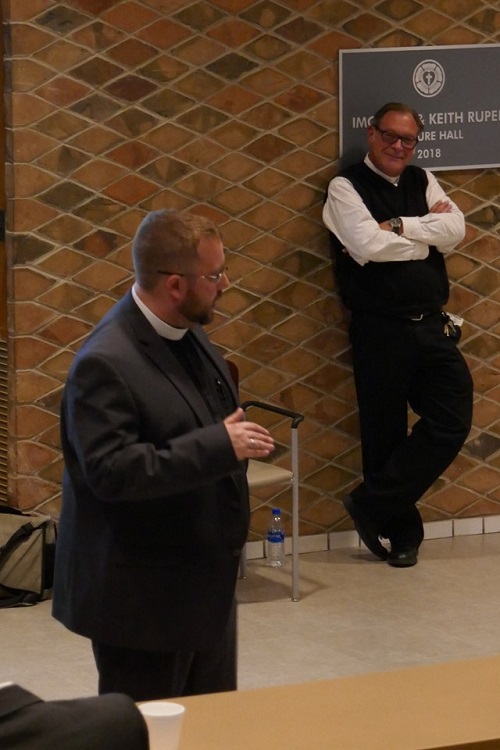 oday’s convocation was slightly different than usual, as the Pastoral Ministry and Missions Department invited two local pastors from the Decatur Circuit to give an overview and ultimately advice to seminarians who are anticipating (some of them very soon) serving in a rural context. Rev. Daniel Dahling (pictured in the back) has been at Zion Friedheim Lutheran Church for 32 years while Rev. Leonard Tanksley (pictured in front, speaking) graduated from CTSFW only last May and is approaching his first ordination anniversary at St. Peter Lutheran.

With three decades of experience under his belt, Rev. Dahling started. First, he suggested, embrace your church’s customs. The roots of many of his own church’s traditions are older than Synod, as Zion Friedheim was charted in 1838. When people ask when they joined the Synod, the answering joke is always, “Synod joined us.”

As such, the customs are old and respected—you don’t know where they came from or how long they’ve been in place. So choose your battles. “What hill are you willing to die on?” Rev. Dahling asked. His advice: keep your theological integrity intact, but don’t die trying to take the flag out of the chancel.

He also recommended two books, “Open Secrets” and “Hollowing Out the Middle,” which noted that there are three kinds of people in a rural setting: those that leave, those that leave and then boomerang back again, and those that stay. “The people that stay, stay for a reason. Put them to work.”

And don’t panic because of the shrinking demographics: serve. “People tend to panic,” he said. “Instead, identify a few areas where you can serve, and serve well.” If your congregation tries a thousand things in a year, they will all fail. Better to focus on two things they do well. For example, the Zion Friedheim congregation supplies blankets to three area hospitals for families who lose their babies (about 200 families per year), and serve some 80,000 meals. “Now, does that get butts in the seats? Absolutely not,” Rev. Dahling was quick to note. “But that’s not the point. We reach out to those in need.” He then quoted Matthew 9:36, “When [Jesus] saw the crowds, he had compassion for them, because they were harassed and helpless, like sheep without a shepherd.”

“No matter where you are,” Rev. Dahling told our future pastors, “it’s Word and Sacrament ministry. It’s the context that makes it unique.”

Rev. Tanksley then spoke on his experiences as a pastor both new to the ministry and to a rural setting. First: “You never know what the day will bring. Yesterday I changed a car battery.

“There’s a lot that seminary didn’t teach me,” he added—things like changing batteries, riding in a combine, farming terminology, and the like. “But you learn it over time,” he added. “I’ve picked up a lot on the fly. And Wikipedia is helpful.”

He’s also found that the church is the focus of the community. By extension, his members want their pastor at everything: community events, wedding receptions, ball games—and, of course, for their tragedies and disasters. About two months into his call, a congregation member called Rev. Tanksley to tell him their barn was on fire. He was taken aback, and to this day regrets his immediate response: “Did you call 911?” He quickly realized that they just wanted their pastor there. Rural ministry, in Rev. Tanksley’s experience, is being present.

One seminarian, likely anticipating his own call to a country church, asked about challenges unique to a rural context. Rev. Tanksley—and Rev. Dahling, nodding his agreement—have found that the biggest challenge is trying implement any sort of change. “People fight hard against change,” he said. “They get in the rut of ‘Pastor, we’ve never done things this way before.’”

Again, you want to pick your battles, but when it’s of doctrinal importance: “You teach. You be patient, and you teach.” That teaching can take years. And ultimately a congregation’s needs and wants are simple: “They come to the church on Sunday, they just want Jesus.”

“You minister to families generation after generation,” Rev. Dahling chimed in, speaking of another unique feature of rural settings: that a pastor doesn’t just minister to individuals but to whole families. Rural churches are often made up of five or six main families and their family offshoots. The pastor is an integral part of that community—though he must remember that he is a shepherd and not a ruler. “The trust and respect is there, but it has to be earned every day.”

“Just love your congregation and they will love you back,” Rev. Tanksley concluded. “’Love covers a multitude of sins.’”