Synod Convention comes to a close soon as voting ends and the delegates begin to go home. Here are some visual highlights of the week as we worked with our sister seminary from St. Louis. The booth design itself reflected the reality that though we are two distinct seminaries, we exist for the same Church and mission, especially as we hear the cry from our congregations for more pastors, praying that the Lord of the harvest may send more laborers into His harvest. We met with many visitors, from alumni to laypeople to a number of prospects, some of them from the Concordia Universities’ booth that was kitty corner to our location (this year they too decided to share booth space) and others who are considering the ministry as a second career.

One of our giveaways was a T-shirt, printed with “We Are Your Seminaries: For the Gospel” (with the sem logos on each sleeve) in Fort Wayne blue and St. Louis green. Our seminary presidents, Dr. Lawrence Rast Jr. and Dr. Dale Meyer, stopped by and posed with each others’ school colors. It was a joy to work with our brothers and sisters from Concordia Seminary; we shared duties and spent a lot of time laughing and trying to one up each other to see who could hand off the most swag throughout the week. We finished with the alumni reception, which was also held jointly, allowing our pastors and deaconesses to spend the evening together.

One of the smaller giveaways–a prayer card tucked into the tote bags (with both seminary logos on them, one on each side)–encapsulated our purpose and intent this week (and every week), as we worked together in Christ:

Dear God, we ask that You continue to bless both of our seminaries as they seek to prepare men for pastoral ministry, women for service as deaconesses in Your Church and other workers for Your ministry. Be with their students, faculty and staff as they seek to do Your will. We also ask You to raise up and send new laborers into Your harvest so that Your salvation reaches the ends of the earth. In Jesus’ name, Amen!

The two seminaries shared a sign and a tower (we posed with our St. Louis counterparts in front of the tower as we began cleanup yesterday afternoon), and had separate kiosk space, though there was a lot of crossover back and forth as we worked together. Dr. Just joined us for awhile as well. 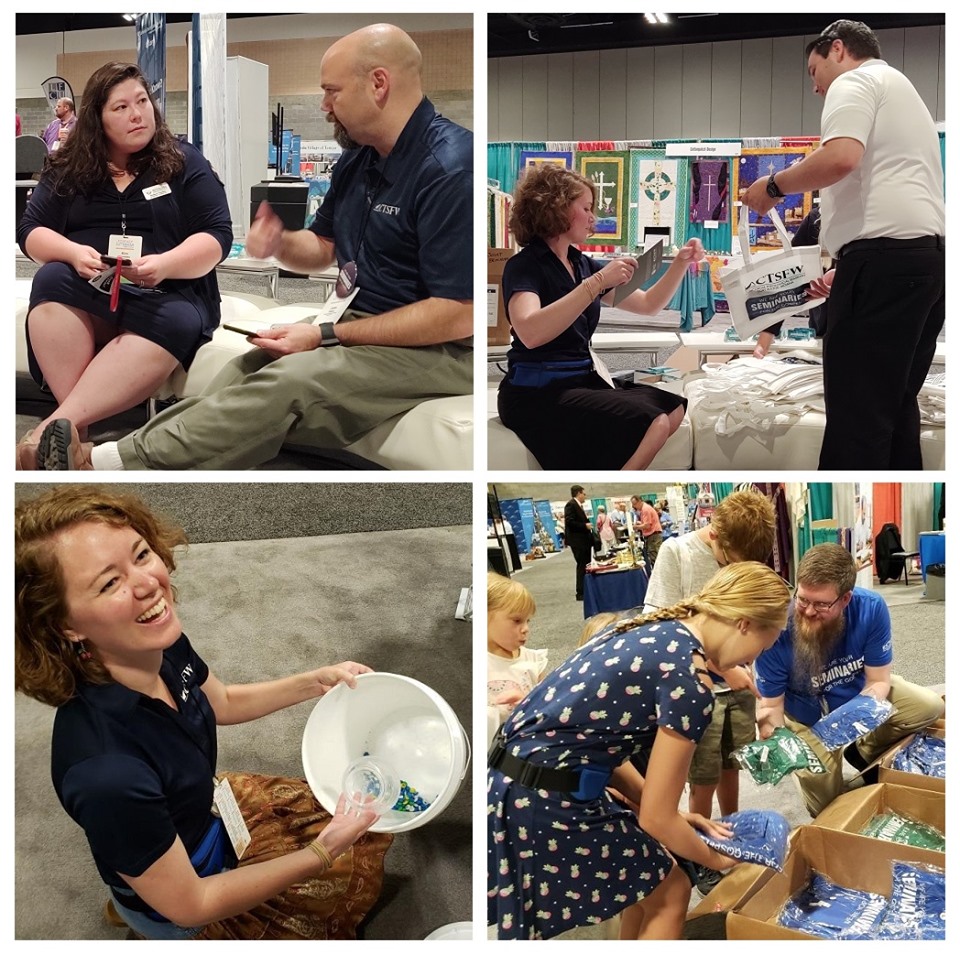 A snapshot of some of the work we did: one of our IT guys meeting with a deaconess from Bethesda to discuss technology options for the men and women they serve, working together with the St. Louis crew to stuff tote bags, handing out T-shirts, and scooping out the last of the M&Ms. We had candy dispensers at each kiosk with M&Ms special printed in blue and white and green and yellow with sem graphics printed on them. (Hauling 80 pounds of candy through the airports is another story in and of itself, but they were a big hit and well worth it.)

A snapshot of the alumni reception. Dr. Rast and Dr. Meyer are in the first picture, more alumni, including newly ordained graduate of CTSFW, is in the second, and Dr. Gard and Dr. Fickenscher (left to right, respectively, in the last picture) said they were celebrating the nine year anniversary of their mutual defeat: they not only roomed together during the 2010 Synod Convention, they allowed their names to stand as presidential candidates (numbers 4 and 5 they explained, grinning, and only on the list for necessity).

Here are some of the items we handed out to our booth visitors. The totes were the same–the picture here is simply showing the two sides–and you can catch a glimpse of the silhouette of Kramer Chapel on the blue and white M&Ms and the CSL seal on the green and yellow ones.

(Side note: the cup the M&Ms are artfully arranged in is actually a LCEF mug, who were in the booth right next door.)