Eight days later, his disciples were inside again, and Thomas was with them. Although the doors were locked, Jesus came and stood among them and said, “Peace be with you.” Then he said to Thomas, “Put your finger here, and see my hands; and put out your hand, and place it in my side. Do not disbelieve, but believe.” Thomas answered him, “My Lord and my God!” Jesus said to him, “Have you believed because you have seen me? Blessed are those who have not seen and yet have believed.”

Though slightly late to the party, the apostle Thomas is counted among the eyewitnesses to Jesus’s resurrection. Without him, we would not have this blessing and assurance: “Blessed are those who have not seen and yet have believed.” 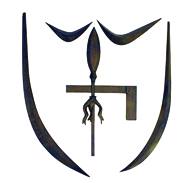 Pictured is his shield, which can be viewed here on campus with the other New Testament Evangelist Shields in Wyneken Hall. The square represents the church that St. Thomas is said to have built in India, whereas the spear is a sign of his martyrdom. Tradition says that he was martyred by a pagan priest, having been first stoned then riddled with arrows, and finally killed with a spear.