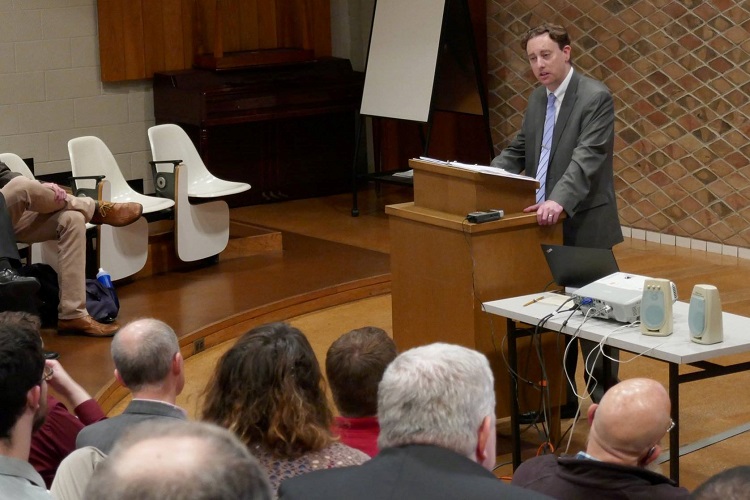 This morning, Dr. Joshua Miller, instructor in religion at Augsburg University in Minneapolis, spoke at our last public convocation for the academic year on the topic of “Pastoral Care and Preaching in Light of the Hidden God.” The talk covered, in short, an age-old, spiritually troubling question: Why would a good, perfect, loving God allow (or even will) evil and suffering?
‍‍‍‍‍‍ ‍‍
Dr. Miller began with Luther’s observation that God does and wills many things that He does not show us in His Word. Though the God revealed to us in Scripture promises to save us by taking away sin and death, sin and death yet remain. So we find ourselves dealing with a contradiction: God’s promise is a Word that does what it says, but billions still suffer, die, and go to hell. Life is one of war, famine, disease, and catastrophe. How is God’s existence justified in the kind of world in which we live?‍‍‍‍‍‍ ‍‍

A range of philosophies over the course of human history have attempted to answer this question: that God does the best He can but evil is outside of His control; evil is the absence of good much in the same way that darkness is the absence of light; God will not/cannot violate free will; God is not all powerful and so cannot keep His promises; God uses evil to teach you how to obey; or the more active response: that it does not matter. Our duty is to be moral in the face of immorality, and by it you can change the world (though this philosophy cannot then answer the question of how a person is moral in the face of impersonal, amoral catastrophes, like hurricanes and earthquakes).
‍‍‍‍‍‍ ‍‍
All of these philosophies lead to bad answers. Or, as God said in rebuke to Job’s friends: “My anger burns against you and against your two friends, for you have not spoken of me what is right, as my servant Job has” (Job 42:7b).

Oswald Bayer, a German Lutheran theologian, pointed out that you get bad answers because you’ve started with a bad question. The question ought to be: is God keeping His promises? For suffering and evil are not philosophical problems but real ones. And the answer to this question? Lament.‍‍‍‍‍‍ ‍‍

Lament is not an argument about God, but an argument with God. It is faithful backtalk. Crying out to God to do something about evil and suffering on the basis of His promise is a faithful expression of belief in that promise. In crying out, you accuse God based on what God has promised. Lament is thus the greatest form and confession of faith; it is trusting that God will honor His promise.‍‍‍‍‍‍ ‍‍

Faith holds onto the promise in spite of its contradiction. This is Jacob wrestling with God, refusing to let go until God blesses him. These are the laments in the psalms, Moses intervening on behalf of the Israelites God has just vowed to destroy, Jeremiah’s Lamentations, and Jesus crying out, “My God, my God, why have you forsaken me?” (Matt. 27:46).
‍‍‍‍‍‍ ‍‍
We live in the end times between Jesus’ first and second advents, caught between the old age and the new age, the already and the not yet. The first advent was the answer to lament, when Christ came into the world to put on creation, “for we know that the whole creation has been groaning together in the pains of childbirth until now” (Rom. 8:22). His second advent will complete what was begun, when all will pass away.
‍‍‍‍‍‍ ‍‍
Until we enter into glory, a pastor cares for His flock by taking evil and suffering seriously, and taking the promise seriously. He is not called to silence the voice of lament, but to lament together with those suffering (what the Smalcald Articles in the Book of Concord refer to as the “mutual consolation of the saints”). Pastors thus stand at the altar and pray the promise of His Word back to God on behalf of God’s people.