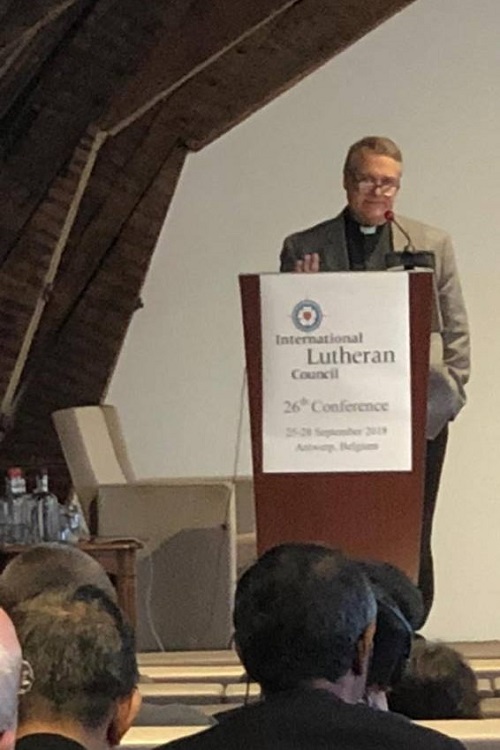 President Rast presented at the International Lutheran Council (ILC) World Conference today in Antwerp, Belgium. This morning the ILC welcomed seventeen new church bodies into membership, ten from Africa, three from Europe, and four from Asia, bringing the total number of church bodies in the ILC to 54, now representing 7.15 million Lutherans.
‍‍‍‍‍‍ ‍‍
The ILC Executive Secretary, Rev. Dr. Albert Collver who is also Director of Church Relations in the LCMS and Assistant to President Harrison, introduced the conference theme of “Ecclesiology and Ecumenism,” followed by our own Dr. Roland Ziegler (Professor of Systematic Theology and Confessional Lutheran Studies here at CTSFW).
‍‍‍‍‍‍ ‍‍
President Rast later spoke on the topic “Turning Points: A History of the Fellowship Issue in The Lutheran Church—Missouri Synod.” Papers from the World Conference will be published on the ILC website in October and rumor has it that there may be an audio recording available of President Rast’s presentation. However, as these are not yet available (we will let you know here on our Facebook page once we have links to share), the following is a small excerpt from his presentation:
‍‍‍‍‍‍ ‍‍
“[In the 1800s, America] was a radically “churched” culture and becoming more so all the time. In this peculiar context, so different than the one that we face today, first allow me to say what the Missouri Synod’s purpose was not. The LCMS was NOT formed to establish the truth of Christianity. For most Americans in 1847, Christianity was the true religion and its Bible was the Word of God. As such, Missouri was relieved of the burden of making arguments for Christianity’s truthfulness. Rather, what was thrust upon it and what it took up willingly and vigorously was to establish the superiority of the Lutheran confession among the various confessions of the churches. And then beyond that to demonstrate the superiority of its doctrinal understanding and practical application of the Lutheran Confessions among the myriad of Lutheran synods in the United States.
‍‍‍‍‍‍ ‍‍
“My point is this: we have struggled, are struggling, and will continue to struggle with the implementation of biblical truth within rapidly changing historical contexts. That has always been the Church’s problem and it will continue so to be until our Lord returns. What this small study hopes to do is to locate a portion of that tension in the question regarding church fellowship. It is perspectival and does not pretend to be exhaustive. It simply seeks to offer an overview with a few explicit examples of how the Synod has faced its ‘turning points.’”
‍‍‍‍‍‍ ‍‍
He then presented the following turning points:

1. Coming to America
2. Forming the LCMS
3. Working Toward Confessional Lutheran Union
4. Picking Up the Pieces after the Predestination Controversy
5. Riding the Ecumenical Roller Coaster
6. We have Met the Enemy…
7. Quo Vadis Missouri?
8. (Also titled Turning Point #?) What’s Next?
‍‍‍‍‍‍ ‍‍
President Rast concluded:
‍‍‍‍‍‍ ‍‍
“The [LCMS] was from its beginning committed…to unity in the truth. Church unity is bound to unity in doctrine and is possible because of the theological unity, which has its basis in the complete truthfulness and clarity of Scripture. False teaching…and false teachers have to be avoided. On this, there is agreement throughout the history of the LCMS. But there is also significant difference of opinion on how to carry that out. Too often we claim a simple historical consensus on the part of Missouri Synod on this question. The reality, not surprisingly, is far more complicated. It is always that way in families and, I expect, it will be that way until our Lord returns. For our part, we live in the here and now with hope and expectation, always relying on the mercy of our gracious God, who has provided salvation for us in the suffering, death, and resurrection of Jesus Christ.”
‍‍‍‍‍‍ ‍‍
You can learn more about the ILC (and especially this conference, including the new member churches), on their news page at https://ilc-online.org/news/.