James A. Neuendorf received his call today during chapel. He has been placed with the Board of International Mission (St. Louis, MO, Missouri District) as a missionary to Puerto Rico. 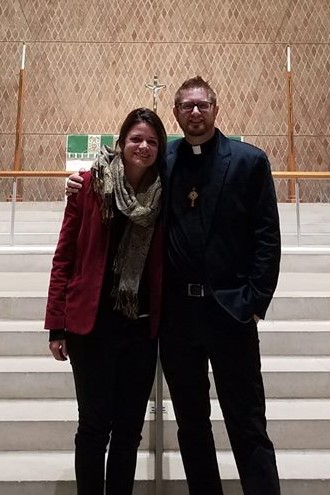 James’ path through the Seminary looks quite a bit different than that of his fellow seminarians. He and his wife, Christel, were serving as career missionaries in the Dominican Republic when he began his studies to earn an MDiv. However, the mission did not want to lose him in the field, so his degree was scheduled to take six years to complete: distance education (and the occasional intensives in Fort Wayne) and vicarage for four years while in the Dominican Republic, then two years on campus to complete his MDiv.

I did it in a year and change,” he said, referring to his on-campus time. “So I guess I was at the Seminary both longer than usual, but shorter than planned. It was pretty intense.” He did it so that he and his wife could return to the mission field full-time as soon as possible. Christel remained a career missionary to the Dominican Republic while he focused on studying (she split her time between the two countries), though she was also recently transferred to Puerto Rico in anticipation of James’ call.

In the final words of the “Charge to the Candidate,” spoken today by Dr. Gieschen:

“The Lord bless thee from on high, and make thee a blessing to many, that thou mayest bring forth fruit, and thy fruit may remain unto eternal life. Amen.”