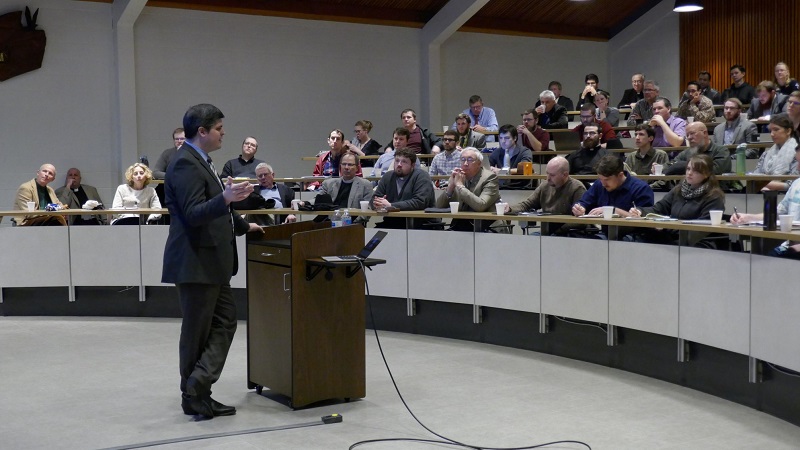 Yesterday after chapel the CTSFW Life Team invited Dr. Andrew J. Mullally to speak on the topic of physician-assisted suicide. Dr. Mullally is a passionately pro-life family physician who has spoken before the Indiana legislature on the topic in order to combat the movement in the public square. “Wherever God has placed us, we’ve got to tend our garden,” Dr. Mullally explained. It was a full-house in classroom L-7 as seating ran out and students began standing along the walls, most of whom will someday face these issues head on in their congregations. “I want to equip everybody—people of good will and common sense—with knowledge. Instead of trying to figure it out in the freezer section of Kroger, have it worked out beforehand. Think through these issues before you have the conversations.”

It is also not a modern issue, nor are the arguments in favor of physician-assisted suicide new. In the 1870s, suicide was advocated to relieve pain, in the 1890s that it was an acceptable means to remove those burdensome to society, and in 1906 Iowa introduced a bill to actually fine and imprison physicians who refused to kill patients who asked them. It was defeated by a 3:1 margin. But by 1937, 45% supported the killing of deformed and mentally disabled children, the same near 50-50 divide we see on these controversial issues today. “Their truly is nothing new under the sun,” Dr. Mullally commented. 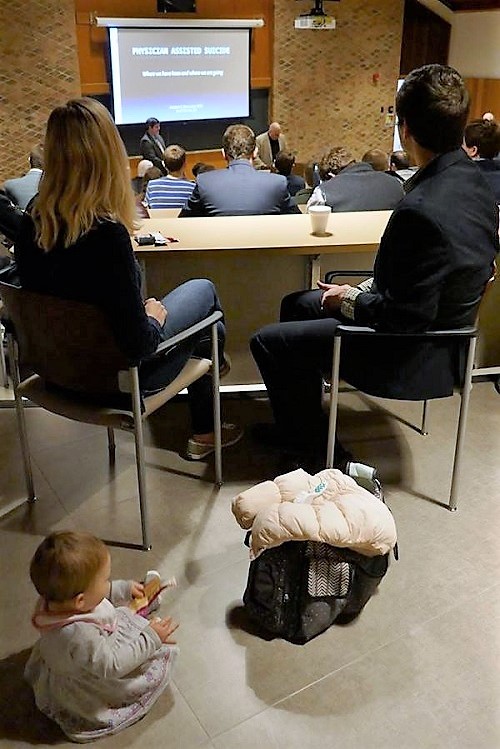 In an 1895 essay on the right to day, German theorist Adolf Jost stated, “The state must own death,” inspiring the 1920 work so crucial to the Final Solution, “The Permission to Destroy Life Unworthy of Life.” The Nazi Euthanasia Program would steal 5,000–8,000 children from their parents, ultimately killing hundreds of thousands for such crimes as blindness, missing limbs, seizures, scoliosis, club foot, and Down syndrome.

Fifty-nine years after WWII ended, the medical director of the department of pediatrics at the University of Groningen (Netherlands) created the Groningen Protocol, defining the criteria that should allow for infant euthanasia. The Dutch Society of Pediatrics declared the protocol mandatory in 2005. “The heights from which these universities have fallen,” Dr. Mullally remarked, then read out the University’s motto: Verbum domini lucerna pedibus nostris. “The word of the Lord is a light for our feet.”

“I think their light went out,” he said. “They have no idea what they’re doing.”

Today, euthanasia and physician-assisted suicide deaths in Europe rise 15% annually. In Switzerland—the suicide tourism capital of the world—25% of those euthanized have no terminal disease; many are simply “tired of life.” Belgium legalized euthanasia for those in “futile medical condition” in 2006, but by 2014 they had removed the age limit, allowing children to consent to euthanasia if they “understand the repercussions of their act.” Now, half of all Belgian nurses who euthanize patients admit to doing so without consent.

The slope ever slips downward. A choice becomes a right, which becomes a duty, which is eventually done with or without consent. Between coercion and conflicts of interest, the most vulnerable are marginalized. The strongest lobbyists for the legalization of physician-assisted suicide are insurance companies; understandable from a practical point of view when the numbers shows that 28% of Medicare expenditure is spent in the last six months of life. Suicide is cheap as compared to palliative care. In states that have legalized physician-assisted suicide, insurance companies have begun rejecting claims for expensive, possibly life-saving treatment like chemotherapy, suggesting physician-assisted suicide instead as the viable alternative.

Language has always been an important part of the movement. “Death with Dignity” is a popular euphemism. In 2003, the right-to-die and assisted suicide advocacy organization, the Hemlock Society, changed its name to End of Life Choices. In 2007 the group merged with the Compassion in Dying Federation and became Compassion & Choices. Dr. Mullally pulled the following from their website: “The U.S. is facing a Looming Crisis of Suffering as Americans approaching death increasingly find themselves on a conveyor belt of unnecessary, unwanted and painful medical treatment.”

Dr. Mullally advocates for changing the language–or, more accurately, changing the language back. The word compassion, from the Latin, means “to suffer with.” Thus the absurdity in Compassion & Choices’ solution to this “Looming Crisis of Suffering”: kill off our old people. 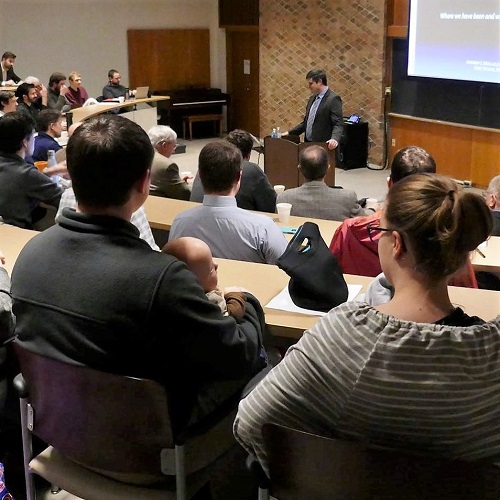 “Talk about it with real life terms,” he said. “The definitions matter.” Autonomy is not a virtue, and it does not mean the same thing as dignity. If it did, a baby, who is not autonomous, could not have dignity. Neither could a patient with dementia. Instead, human dignity has its roots in Genesis 1:27: “So God created man in his own image.”

Those against physician-assisted suicide are a unique coalition, ranging from religious to non-religious supporters, some even pro-choice. “Remember to be sensitive,” Dr. Mullally recommended. “Try not to alienate people by assuming we agree on all life issues. Atheists, who believe this life is your one shot, are obviously more sensitive to end of life issues versus beginning of life.” An atheist will never quote the Bible as a Word of authority, but he has a right to his conscience apart from religious liberty.

One final thing to be aware of is the “Principle of Double Effect.” Supporters of physician-assisted suicide argue that the morality of an act is identified by the outcome and not the act itself. So while the American Medical Association recognizes a critical difference between removing a respirator and actively killing a terminally-ill patient, supporters of physician-assisted suicide would argue that in both cases the patient dies, and thus either option is moral. On the other hand, the principle of double effect (the “double effect” would be causing harm as a side effect when bringing about an otherwise good end) takes into account intent and purpose. For example, in an ectopic pregnancy a doctor does not remove a woman’s fallopian tube to kill her baby, but to save her life. The death of the baby is a tragic consequence, not the end goal.

Dr. Mullally finished with ways to help: prayer, a call to educate our neighbors, that we contact our senators and congressman at (202) 224-3121, and to vote. He also left us with a handful of resources, including humanlifeaction.org, patientsrightsaction.org, patientsrightscouncil.org, ethicalhealthcare.org, and notdeadyet.org. Finally, he recommended reading up on the other side of the issue, to arm yourself with their arguments and be prepared to answer them. You can find out more about the pro physician-assisted suicide movement at compassionandchoices.org.