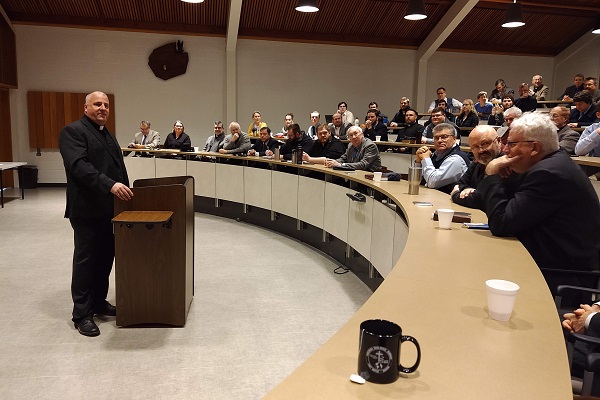 Yesterday’s convocation hour featured Dr. Peter Scaer, Professor of Exegetical Theology, in honor of his advancement in rank from associate to full professor. He is known in the Fort Wayne community for his work in life issues as well as online for His witness on social media, particularly as he tackles current issues. For this convocation, he presented the paper, “Lutheran Identity: At Home in the Body.”

As Christians we are members of His family through baptism, with many brothers and sisters in Christ; as His Church we are also the bride of Christ. But what of the earthly family, particularly in light of the sexual revolution, the dissolution of marriage, the rise of gay marriage, and the transgender movement? There is an identity crisis within both the secular world and in the American church.

Lutherans are a peculiar people. We go to the Bible, the hymnal, and the catechism, which testify to our identity. These resources provide a firm foundation. But will these old hymns and confessions keep us steadfast?

In the present age, talks of tolerance have changed to conformity. The culture war, our foes proclaim, has been lost: live with it. But who are our foes? Why are they so vindictive? In a rational world, Christians would be called odd, not evil. But we have entered into an age of modern paganism. We find god in nature, say god is the universe, claim that we have found god within ourselves. There is no transcendental truth: it’s a matter of individual choice. It’s conscience without religion; faith without God. Personal opinions may be allowed, but a God that judges all things cannot be tolerated.

Though Christians are politically weak in the public arena, we are still seen as a threat to the modern age. Likely because we adamantly echo Acts 5:29: “We must obey God rather than men.” If marriage has been established by God as a union between one man and one woman, we cannot redefine marriage; if all life is valuable, we cannot tolerate abortion; if God created them, male and female, we cannot redefine biology in the name of tolerance.

Whether our culture is secular or pagan makes for a good academic debate, but our enemies fight with a religious fervor. The lie cannot abide the truth any more than darkness can tolerate the light. When the time comes, will we be up to the challenge with our Lutheran identity intact? Will we say with the reformer: here I stand?

Our Lutheran identity must be understood in, with, and under our Christian identity. We gather around the martyrs of both a past age as well as in this age. Our lives are not yet on the line, but are livelihoods are or soon might be. When Paul encouraged the Thessalonians by sending Timothy “to establish and exhort you in your faith, that no one be moved by these afflictions” (1 Thess. 3:2-3), he was not necessarily referring to anything as dramatic as being pulled before the magistrate. They were likely suffering the social pangs of the age–the verbal abuses and scorn from their family, friends, neighbors, and community.

Christians must be willing to be hated and scorned. And those who believe that social abuse is easy have not experienced it. In the last decade alone, there has been a 10% decline in those who identify as Christians. We do not need a pew research poll to let us know that many pews are empty. This should come as no surprise: the culture’s propaganda is powerful and pervasive. But our Christian identity must be understood in, with, and under our identity as those created by God in His image.

The ideology of the sexual revolution separated sex from child bearing, sex and child bearing from marriage, and the biological separation of men from women. The movement’s success heralded in a freedom which has turned sour. What looked like chains were the ties that bound us together: a man to his wife, and parents to their children. Marriage now lasts as long as you both shall love. We have undermined the only institution proven to raise children well.

In the previous age, children knew their place in the world as son, daughter, sibling, cousin, niece or nephew, and grandchild. For our own pleasure, we now rob our children of their identities and their childhoods. Identities are given and taken away; your mother’s boyfriend is your honorary Uncle one day, and no one the next. Your father is a “sperm donor” and you do not speak of him.

The result is loneliness, isolation, and lack of identity. Now these have manifested in matters of gender. Increasingly, young people don’t feel at home in their own body. One’s self-perception does not match reality. Androgyny is a survival strategy.

As Christians, what can we do about this overwhelming perversity and brokenness? It’s easy to retreat: the earthly family is temporary, the heavenly family eternal. But of course the earthly family does matter. We are clothed, fed, and brought to the font by our earthly parents. God identifies families and brings them together. In the 4th commandment, all members of the family are protected: father, mother, and children.

Throughout the gospels, Jesus affirmed these truths. He became God Incarnate first in the womb, affirming life; in Matthew 19:4-5 he affirms both the reality of two genders and the sanctity of marriage. In Acts, significant portions of the early, earthly church were built on the household conversions of a handful of families. Faith and family are more easily distinguished than divided. Is it possible for the church to prosper as the family collapses? I have seen divorce ravage the flock.

Secularism has taken a toll. We know the demographic challenge. We have also seen how a congregation revives even when a few families are fruitful and multiply. Children remind us of tomorrow, as well as the eternal tomorrow. They are a catalyst for attendance. Those who live in a family are more likely to go to church.

Does our body play any role in our identity? The pro-life movement points to bodily DNA, to the beating heart, and to pictures on an ultrasound. Biology is on our side. Whereas the pro-abortion movement teaches that the body is not enough to claim personhood. Instead, we are defined by whether our body is wanted, or if it’s useful or autonomous. Even sex is seen as merely a mechanical process. In the transgender movement, the body is trumped by the self-identifying mind. Not at home in their house or in their body, is it any wonder our children are confused? We are a generation of isolated, alienated adults.

Secularism is both a religion and an excuse. Gnosticism (an ancient but still persistent system of unbelief that is an “existential” approach to religion and salvation) offers a get out of jail free card. Food is for the stomach and the stomach for food. Sex is merely an appetite to be satisfied. We take our place at the rich fool’s table where we eat, drink, and be merry with no thought to anything beyond our body’s desires. Eternity is a terrifying thought, annihilation the world’s greatest hope. If the body is gone, then the things that I do are gloriously inconsequential.

Yet we must be about the business of seeking and saving the lost. The body is a temple of the Holy Spirit; the desecration of the body is a big deal. The truth offers hope: we are at home in the body. We have something to live for AND to die for. The Church has much to offer abandoned children, lonely adults, and those who have self-mutilated themselves in a tragic attempt to cure themselves of their hopelessness: a message of affirmation. They have a home in their physical body and in the body of Christ.

It’s not a message of escape but of cleansing and recovery. The truth is natural and holistic and makes sense of the world we live in. We speak of fallen nature meant for better things. Our bodies were made in God’s image and redeemed by Christ’s blood. Our hope is anchored in Christ’s resurrection. We fear no one but God.

When a baker or florist is driven out of business, even these men and women are not as isolated as those who aim to alienate them into compliance. They are fellow members of the Body of Christ. If one member suffers, all suffer together. Their burdens are ours. We teach the resurrection but also Christ crucified, where we behold the wounds that have been sanctified.

There is no spiritual worship apart from bodily worship. We live in reality; we were baptized in reality and we eat and drink Christ’s body and blood in reality. We feel at home in a body that serves as a temple of the Holy Spirit and at home in Christ and the Church, which fill the gaps of our body and soul. You are not your own, for you have been bought with a price. In an age of radical autonomy, that may seem off-putting, but in the age of the great scattering of those without family or identity, that is a cure. We offer a homecoming, a seat at the table, a place of belonging where we matter to others and to God.

Today’s convocation summary is largely quoted straight from Dr. Scaer’s presentation of his paper, but with lots of subtractions to keep it relatively short and some additions to smooth the transitions created by the pieces that were removed. The full paper will be published in Concordia Theological Quarterly in a future issue, but you can also watch the presentation in full here: