Last Wednesday, just before the final Divine Service at chapel for the 2019 Fall Quarter, “Word for the Wee Ones” (the weekly Sunday-school-style class for children of the Seminary community) and one of the homiletics classes met for a shared purpose. Rev. Chris Maronde, associate pastor at St. John in Decatur, IN, and graduate assistant at CTSFW while he studies for his PhD in Theological Studies, teaches a homiletics course for fourth years. Part of this preaching class involves children messages, and while most of the men in the class had been able to give a children’s message at a local LCMS church or school (recording themselves and sending the video to Rev. Maronde for grading), three of these seminarians had not yet had a chance to do so.

Rev. Maronde  first thought to have these final three students give a children’s message to his own daughters during their last class period, but then came up with a better plan. He spoke with the director of the Wee Ones program, Mrs. Renée Wiley, of the library staff, as the children’s class takes place at the same time. The children and moms in attendance that day received three short messages and prayers on different days of creation. The seminarians themselves had quite the audience, including their seminarian brothers from the class.

It was also an excellent chance to field test their skills with redirecting the unpredictable responses from their message recipients. “What’s the scariest part about water?” one of the seminarians asked his charges.

“FROGS!” immediately declared a boy sitting in the front.

A typical day at the office, as it will someday be for these future pastors. 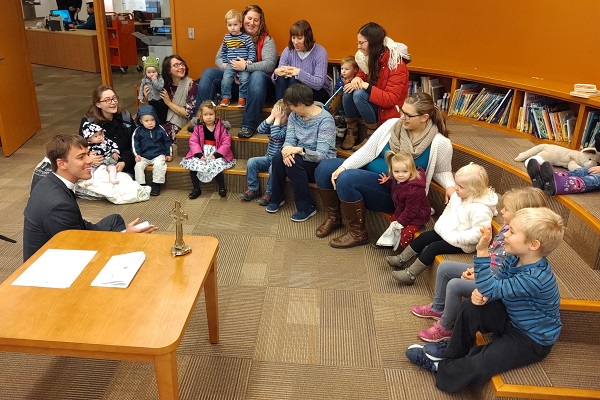