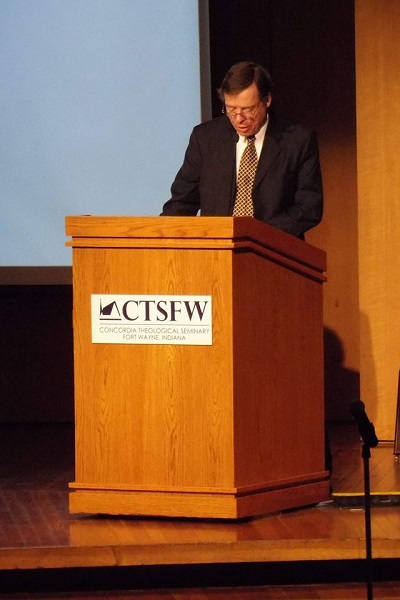 The phrase “penal substitutionary atonement” captures the essence of what I was taught when I was young: that Jesus not only led the perfect life, He also took upon Himself the sins of the world and paid fully for those trespasses with His suffering and death on a cross. In other words, Jesus took our place and so made possible our salvation.

However, I became aware of another position of the saving work of Christ, which has some influence in the Christian Church, even among Lutherans. This creeping heresy, taught by Gerhard Forde (1927-2005), is why the Exegetical Department chose the theme “The Cross, the Atonement, and the Wrath of God” for this year’s Exegetical Symposium. A summary of Forde’s teachings:

God wants to be merciful, but natural man rejects God’s mercy. This arouses the wrath of God, in which God makes himself absent/hidden from human beings. God then becomes man and comes to us to be present for us. Christ must come this way in order to show His mercy. So Christ came, preaching forgiveness, and unilaterally forgiving sins without any so-called payment being made for the debt of sin, and we, being natural, unconverted man (i.e. works-righteousness legalists) killed Christ. Christ was put to death because he forgave sins. It was not for sins that He died, in order to make forgiveness possible. Instead, we considered what Christ did as wrong. Thus Christ bore our sins in His body not for a substitutionary reality, but because we sinned, beat His body, put a crown of thorns on His head, and nails in His hands.

An analogy of this goes as follows: A child is in the street, a man casts himself in the path of the truck, saves the child, but is in the process killed. He gave his life for another but it was an accident. In this analogy, we are the ones driving the truck of legalism. Jesus’ death was a sacrifice for us, but not in the sense of substitutionary atonement. He did not die for our sins, to pay the penalty for our transgressions. Forde explains that Christ’s death saves in part because it reveals our sin of rejecting the merciful God. Christ’s sacrifice unmasks our legalism and shows His grace and mercy. God is satisfied when we believe and trust in Him as the God who has and shows mercy.

Dr. Maier paused her for a brief comment: we would all agree that humanity is in bondage to works righteousness. Some aspects of Forde’s teachings even come close to the truth, so much so that, at first glance, much of it seems unobjectionable. But a longer looks reveals the untruths at its core.

Forde’s position demands: Why can’t God just pardon without payment for sin or fulfillment of the Law? Why can’t God unilaterally forgive as we do? If God is merciful, why must justice be satisfied before He can enact mercy?

If one says that God must be satisfied, then, according to Forde, “everything depends on Jesus’ punishment and death but not on the resurrection. There is no need for a resurrection really—one could just as well say that the Son of God suffered and was killed to pay the debt and that’s all there is to that. What need is there for anything more?” He argues: “The transfer of someone else’s sin to the innocent is absurd and improper, just as in reverse the transfer of someone else’s righteousness to the unrighteous.”

The deep problem undergirding Forde’s psotion is that Forde does not like or accept all of the teaching of Scripture about God. In a selective manner he holds to the passages he likes. He wants a God that conforms to his preconceived notion about who God should be. But we are to hold to the whole counsel of God’s Word, not parts of it. Certainly God is merciful, gracious, and loving, but so too is He holy, righteous, and just.

Forde does not have the proper balance between his mercy, grace, and love on the one hand, and his holy, righteousness, and justice on the other. “God had to be true to himself” (to borrow Forde’s phrase). God had to be God. In His holy, righteousness, and justice, He could not just ignore sin to unilaterally forgive man’s sin. Something had to be done to take away the offense to those attributes of God. To take from Forde, again: “Let God be God.”

Forde does not speak of God as holy, righteous, and just, but as a kind of celestial bookkeeper, a kind of tyrant. It’s not redemption, but a matter of God being bought off. It’s not His righteousness and holiness that demand blood, but a sort of divine cruelty.

Forde asks, incorrectly: why must God’s justice be satisfied before he can be merciful? We answer: justice is an attribute of God, and because of His mercy, grace, and love, God sent His Son to die for the world. Forde questions why God should find the death of the Son as acceptable and doubts whether His death is even enough to pay for the sins of the whole world. But teachings throughout the Word speak of Jesus as the perfect sacrifice. His death is acceptable because He was not only a man but also God. Because God was involved, redemption is complete and universal.

The whole of the Bible speaks to this truth, beginning with the Old Testament and the first Gospel announcement:

God always forgave in view of the coming deliverer, who would be wounded even unto death for the sins of Adam and Eve and their sinful descendants. Genesis 22 (when Abraham is tested, and obediently takes Isaac to the mountain to put Him to death, only to have the Angel of the Lord provide a ram as a substitutionary sacrifice), shows that substitutionary sacrifice is acceptable to God. This vicarious sacrifice foreshadowed both the mosaic sacrificial and the sacrifice of Jesus Christ. One life takes the place of another. “The substitutions of one life for another is acceptable to God—that is what relieves us from sacrificing average sinful life” (Kaiser in “Hard Sayings of the Old Testament”).

Mosaic Law continues the foreshadowing of the substitutionary sacrifice who would be put to death once for all:

“He shall lay his hand on the head of the burnt offering, and it shall be accepted for him to make atonement for him” (Leviticus 1:4).

“Speak to the people of Israel, saying, If anyone sins unintentionally in any of the Lord’s commandments about things not to be done, and does any of them, if it is the anointed priest who sins, thus bringing guilt on the people, then he shall offer for the sin that he was committed a bull from the herd without blemish to the Lord for a sin offering. He shall bring the bull to the entrance of the tent of meeting before the Lord and lay his hand on the head of the bull and kill the bull before the Lord…And the elders of the congregation shall lay their hands on the head of the bull before the Lord, and the bull shall e killed before the Lord” (Leviticus 4:2-4, 15).

Symbolically, God’s justice was carried out and thus the sinner was spared death. The sacrifice stands between (i.e. “atones for”) the sinner and God’s judgment. The priest atones for the sinner and he (or they) are forgiven. Indeed, the sacrificial directives in Mosaic Law have their roots in Genesis 3:15. The promised savior would be wounded unto death. Thus is demonstrated God’s nature: His holiness, righteousness, justice, as well as His grace, mercy, and life. Payment has been made to God for every sin. Jesus Christ has rendered full payment for our debt.

Then he showed me Joshua the high priest standing before the angel of the Lord, and Satan standing at his right hand to accuse him. And the Lord said to Satan, “The Lord rebuke you, O Satan! The Lord who has chosen Jerusalem rebuke you! Is not this a brand plucked from the fire?” Now Joshua was standing before the angel, clothed with filthy garments. And the angel said to those who were standing before him, “Remove the filthy garments from him.” And to him he said, “Behold, I have taken your iniquity away from you, and I will clothe you with pure vestments.” And I said, “Let them put a clean turban on his head.” So they put a clean turban on his head and clothed him with garments. And the angel of the Lord was standing by.

And the angel of the Lord solemnly assured Joshua, “Thus says the Lord of hosts: If you will walk in my ways and keep my charge, then you shall rule my house and have charge of my courts, and I will give you the right of access among those who are standing here. Hear now, O Joshua the high priest, you and your friends who sit before you, for they are men who are a sign: behold, I will bring my servant the Branch. For behold, on the stone that I have set before Joshua, on a single stone with seven eyes, I will engrave its inscription, declares the Lord of hosts, and I will remove the iniquity of this land in a single day. In that day, declares the Lord of hosts, every one of you will invite his neighbor to come under his vine and under his fig tree.”