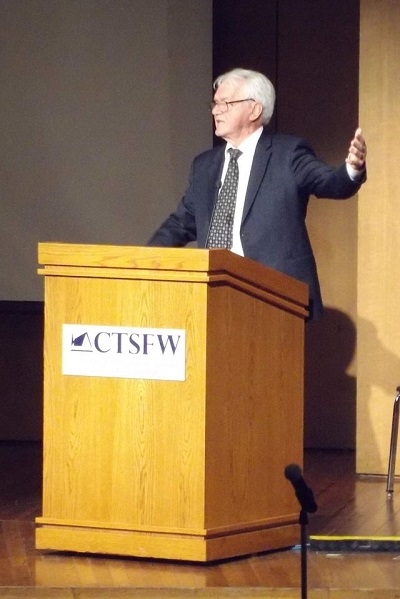 What I want to do is give you a broad stroke overview of atonement, primarily in the Old Testament and how that hinges on our understanding of the New Testament. People in the ancient world believed they could atone for their sins by offering sacrifices to the gods. That seems to be innate in our humanity. We’ve done something wrong, we’ve disturbed the powers that be, and we’ve got to make amends. I put it to you that’s still ingrained in our humanity.

In stark reversal to that common conviction, the Bible teaches that God Himself atones for the sins of the world by the sacrifice that He provides for them in and through His human Son, His incarnate Son. So not atonement that we make, but that atonement that God makes for us.

As you all know, God so loved the world that He sacrificed His Son that whoever believes him would not perish but have eternal life. And John adds, at the end of that chapter, a verse that is seldom regarded but is significant: “Whoever believes in the Son has eternal life; whoever does not obey the Son shall not see life, but the wrath of God remains on him” (John 3:36).

Atonement should not be a matter of dispute for us, as it is laid out in the third article of the Augsburg Confession. Jesus was sacrificed not only for original sin but also for other sins, to propitiate God’s wrath. Then in the next article we confess that those who believe in Christ are justified for His sake because He has made satisfaction for their sin by His death.

The doctrine of the atonement doesn’t explain the significance/meaning of Christ’s death (although that’s implied in it), but rather teaches what Christ accomplishes by His death. Atonement isn’t a theory because it doesn’t have to do with idea but with realities, facts. Atonement is not a theory, it’s a reality.

The rite of atonement was part of the order of service in Israel; it was the first enactment every morning and every evening as the daily sacrifice was presented. It very much performs a similar role to our rite of Confession and Absolution in a Communion service. It’s the first act in the order of service. Now, these daily rites of atonement were expanded to include sin offering for purification from particular sins and guilt offerings for particular acts of desecration. In Leviticus 17:11-12, God makes this decree in the rite of atonement:

“For the life of the flesh is in the blood, and I have given it for you on the altar to make atonement for your souls, for it is the blood that makes atonement by the life. Therefore I have said to the people of Israel, No person among you shall eat blood, neither shall any stranger who sojourns among you eat blood.”

Now by the association of this verb “to make atonement” with the word for ransom in Hebrew, atonement is also to be understood as the payment that God makes to ransom His people.
These are words of institution. The focus on the blood and the application on the altar. God gives the blood. God institutes the use of blood by the means by which He Himself grants/accomplishes atonement. Second, God institutes this rite as a vicarious act by which the life of an animal is exchanged for the life of the people. The death of the animal provides life. Not from the animal, but life from God through the blood. Thirdly, the Israelite are ransomed from death by the blood of the lamb. Since God instituted the rite of atonement as part of the service of burnt offering every morning and evening, it’s placement in the service shows us its nature.

The act of atonement is no longer performed repeatedly as a regular rite each morning and evening as at the temple in Jerusalem, because Jesus has atoned for all human sin once and for all in human history by offering Himself as the perfect sacrificial victim. Secondly, through Jesus as high priest, all people—Jews and Gentiles—now have safe access to God the Father. Through Him and His blood, they may now draw near to God the Father with boldness and confidence to receive grace and mercy from him. “Let us then with confidence draw near to the throne of grace, that we may receive mercy and find grace to help in time of need” (Hebrews 4:16).

Since we have been justified by the blood of Jesus, says Paul in Romans 5, we have access to God’s grace (“Through him we have also obtained access by faith into this grace in which we stand, and we rejoice in hope of the glory of God” Romans 5:2). That’s the term: access. As well as that, we have been consecrated through the blood of Jesus as members of God’s holy priesthood, to serve as holy priests already now with Jesus. Whereas atonement and cleansing was done in the Old Testament for admission to God’s presence in the earthly sanctuary (temporary), now in the New Testament it is for admission to His heavenly sanctuary. We worship with the angels and serve as holy priests even here on earth.

It is by Christ’s suffering and death that He ushers us into His Father’s presence. Because Jesus is God’s Son, atonement is a Trinitarian enactment. You can’t make sense of it except in Trinitarian terms. Jesus was chosen by His Holy Father as the Lamb, the sacrificial offering before the creation of the world, and revealed in the last times for the sake of all men. Since God loved all people, He sent His Son to make atonement for their sins. God the Father offered His Son, once and for all, to bear the sins of the world:

“Nor was it to offer himself repeatedly, as the high priest enters the holy places every year with blood not his own, for then he would have had to suffer repeatedly since the foundation of the world. But as it is, he has appeared once for all at the end of the ages to put away sin by the sacrifice of himself” (Hebrews 9:26).

Jesus was offered up. The passive indicates that it is God the Father who offers up His Son. Through the eternal Spirit, Jesus, God’s incarnate Son, in turn offered Himself without blemish to God the Father (Hebrews 9:14). Since He loved the Church, He gave Himself up on her behalf as a fragrant offering and sacrifice to God the Father.

Notice the Trinitarian movement. Up to down and then up again. Since it is a Trinitarian enactment, atonement is also eternal, eschatological (i.e. “relating to death, judgment, and the final destiny of the soul and of humankind,” as per Google) in nature. It occurs in human history for the benefit of all humanity, but it reaches God’s presence in heaven and, most importantly, anticipates the last judgment. Its practical purpose is the favorable reception of sinners by God now in the Divine Service and on the last day in the last judgment. We meet before God the Judge every Sunday and meet before God the Judge on the last day. Since it has to do with the last judgment, and is eschatological, therefore, the focus of the attention of the New Testament focus shifts from God’s holiness to God’s righteousness.

Also, please note: as per the last couple of summaries, much of this was pulled directly from the speaker as he presented on his topic. Thus the use of “I” throughout. That said, quotes are not perfect; some have been shortened and summarized to assist in the punctual upload of these summaries.