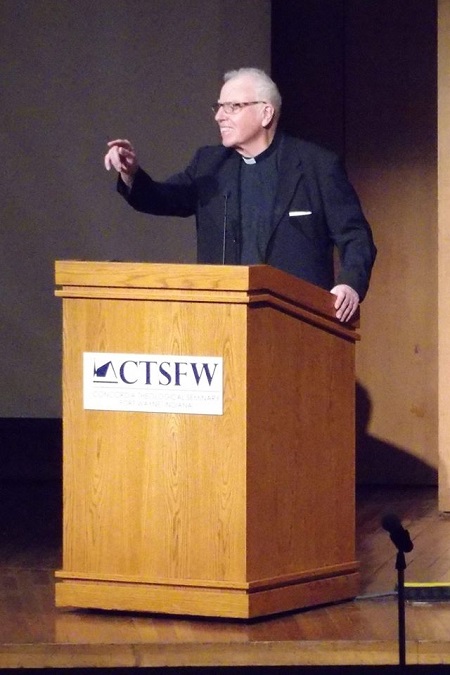 Justification is the starting point of doing theology. In current popular theological proposals, justification has taken center stage and this is not without reason in the Lutheran context. Justification has been considered the key to the confessions. It is the doctrine by which the Church stands or falls. This [justification] could better be said: the resurrection of Jesus.

For some, Gospel has come to mean little more than telling people their sins are forgiven, now popularly paraphrased as ‘good news,’ an umbrella phrase that can embrace most any felicitious report like “I have good news for you. You got a raise.” In the New Testament, Gospel has to do with the oral or written proclamation of the life, death, and resurrection of Jesus.

Faith is created by proclamation but its substance is derived in the historical event of the cross on which it focuses. Sub Pontio Pilato directs the faith to the historical event of crucifixion, and through it to the atonement where God through Christ is recociled to the world. When Paul showed up in Corinth, he preached a composite message that Christ died for sins, was buried, was raised on the third day (1 Cor. 15:1-7). These things were foundational for his apostleship, the message he preached to the Church.

The heart of the Gospel is Christ’s propitiation for sin and not its justifying effections. Current views put the weight of justification on the relational aspects of what the justifying Word does for the believer. For John the apostle, atonement is the cause and justification its effect (1 John 2:2). The order dare not be reversed, so the tail wags the dog.

We locate atonement and justification in God Himself as Trinity. If incarnation is the greatest mystery of all, how much more so is this true of the Trinity? In justifying us, God proves He is righteous because Christ has assumed the penalty we deserve. In loving us, He does not set aside His righteousness but confirms it. His justifying sinners does not compromise, offend, set aside, or ignore his righteousness, but affirms it by sacrificing His Son as atonement.

By absolving the sinner without payment, God would be unrighteous in exempting Himself from rules He imposes on us. If God forgave without atonement (payment), Satan would have reason to accuse God of unrighteousness. But he has no reason. Through the blood of the Lamb, the accuser has been thrown down (Rev. 6:10; 12:10). Since in making atonement, God shows us he is righteous in Himself, His promised to deliver His saints can be trusted.

God responds to Jesus’ cry of dereliction (that God had deserted Him) by raising Him from the dead and so proved He was righteous, as was Jesus. Since justification is commonly understood as the declaration that sin is forgiven, it might be off-putting to speak of God justifying Jesus, but that’s what Paul says: Jesus was justified in the Spirit, that is, God showed that Jesus was righteous in raising Him from the dead, who was wrongly put to death for crimes he did not commit (1 Ti 3:16). He is not acting contrary but in accord with who He is. Any word of justification or forgiveness spoken without atonement is a noisy gong or clanging cymbal. Forgiveness without atonement, even if done by God, would be an act of unrighteousness.

The God who gives Himself in begetting the Son, gives of Himself again in the atonement and justification. “In Christ God was reconciling the world to himself, not counting their trespasses against them, and entrusting to us the message of reconciliation (2 Cor. 5:19). Reconciliation between God and the sinner is accomplished within God’s Trinitarian existence in which God shows Himself to be righteous by satisfying His wrath over sin by the sacrifice of His Son. Our being reconciled happens through faith created by the Word that depends and is extension of the greater mysteries of the atonement and the Trinity. God does not ignore but affirms His righteousness in forgiving sins. In Law and Gospel, God does not speak against himself.

From love, the Father spoke the Word by which the world was created, and this love was extended again by sacrificing His Son as a propitiation for the sin of the world. By the Spirit who aided Christ in His propitiatory death, God creates faith and thus the old creation is replaced by the new one.

This is quoted from only the first half of the paper Dr. David Scaer presented. He went on to speak of and focus on the third use of the Law. To watch in full, purchase a livestream ticket at www.ctsfw.edu/symposia-live.

From his last slide, on the third use of the law:

Law and gospel is the most existential and necessary of doctrines for sinners. Everyone stands coram deo as a sinner for accusation and a believer for justification. No one is exempt. In contrast to law as accusation, the third use lasts forever. “Law is in its third use is proleptic of that time when the second use will pass away and sanctification will replace it as the determinative reality between God and man. Paul said as much, ‘So faith, hope, love abide, these three; but the greatest of this is love’ (1 Cor 13:7). We will see what we believed in and receive for what we hoped and so [faith and hope] will have outlived their purpose. Then the love by which we now love God and neighbor will reach its perfect and intended goal in the resurrection.”

Tertius usus legis manet in aeternum.
[The third use of the law remains.]

A coworker pointed out his favorite line in the section on the third use of the law, so I’ll share it here: “[The commandments] were not prohibitions but descriptions of the lives of the godly who lives their lives before God.” The law is far, far deeper than a list of rules. The law is the description of who we are as God’s people.