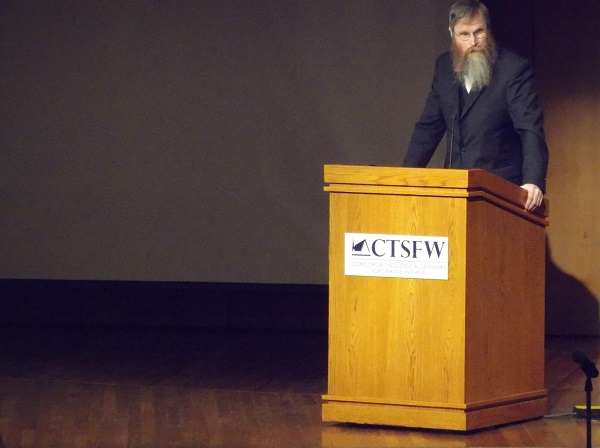 It is worth looking at our brothers in other denominations, for those points upon which we agree and can be allies. For this paper, Dr. Ziegler looked at the theology of Pope Benedict XVI (born Joseph Aloisius Ratzinger, who served from 2005 until 2013) in regards to atonement.

The paper went deep into the details of his theology, quoting many of Ratzinger’s theological writings, particularly since Ratzinger was a part of the Roman Catholic renewal towards a theology that was more biblical. So are there parts of Roman Catholic theology upon which we can be allies?

Ratzinger teaches that real sacrifice is total surrender to God. Sacrifice consists, then, as a process of transformation, of conforming man to God. Since there is evil, the way to unity and love is the way of purification, which takes the form of the cross. Passes through death and resurrection and meets the mediator, who draws all to himself and thus exalts us. Ratzinger sees Genesis 22 as proof for his view that the Old Testament sacrifices shows that sacrifice is about self-giving not destruction (as the ram replaced man as sacrifice).

Christ’s death as the sacrifice of the covenant thus binds God and world together. What fallen man is incapable to do, Christ does. All ritual theories of sacrifice become obsolete and the new covenant has also been concluded by a new sacrifice. Jesus the man who lays down his life is the true worship and glorification of God. The self-offering of Christ should not be understood in terms of sacrifice but in martyrdom and the complete giving of his person. Man cannot give himself and cannot replace himself, and so this seems hopeless. But then Christ substitutes himself for us. The Last Supper is the sacrifice that we keep with thanksgiving.

From Ratzinger: “The blood of animals could neither ‘atone’ for sin nor bring God and men together. It could only be a sign of hope, anticipating a greater obedience that would be truly redemptive. In Jesus’ words over the chalice, all this is summed up and fulfilled: he gives us the ‘new covenant in his blood.’ ‘His blood’ –that is, the total gift of himself, in which he suffers to end all human sinfulness and repairs every breach of fidelity by his unconditional fidelity. This is the new worship, which he establishes at the Last Supper, drawing mankind into his vicarious obedience.”

In another quote: “In Jesus’ Passion, all the filth of the world touches the infinitely pure one, the soul of Jesus Christ and, hence, the Son of God himself. While it is usually the case that anything unclean touching something clean renders it unclean, here it is the other way around: when the world, with all the injustice and cruelty that make it unclean, comes into contact with the infinitely pure one—then he, the pure one, is the stronger. Through this contact, the filth of the world is truly absorbed, wiped out, and transformed in the pain of infinite love. Because infinite good is now at hand in the man Jesus, the counterweight to all wickedness is present and active within world history, and the good is always infinitely greater than the vast mass of evil, however terrible it may be.”

This falls in line with the Roman Catholic teaching about atonement: that the death of Christ extends only to original sin.

So what do we Lutherans say to all that? Per Article 3 of the Augsburg Confession:

“Likewise we teach that the Word, that is, the Son of God, took upon himself human nature in the womb of the blessed virgin Mary. Therefore, he has two natures, one divine and the other human. They are united in one person and cannot be separated. Thus there is only one Christ, true God and true man, who was born of the virgin Mary. He truly suffered, was crucified, died, and was buried. He went through all this so that he could restore us to peace with the Father and be a sacrifice, not just for original sin, but also for all other sins.”

When you look at Ratzinger’s theology, it is impressive in his depth and breadth. But in regard to the atonement, there is a whole dimension he’s lacking. The scandal of the cross is mitigated, no longer of both God’s love and wrath. Reconciliation is through the judgment of sin, the punishment of death. Ratzinger doesn’t have any notion of God’s judgment over sin nor God’s wrath. There is no talk of God’s wrath. Compare that with Article 5 of the Book of Concord: “Indeed, what would be a more sobering and terrifying proclamation of the wrath of God than the suffering and death of Christ, His Son.”

Ratzinger’s theological understanding of the atonement also has consequence for other doctrines. Roman Catholic theologians do not like the idea that our sin is imputed to Christ because, if our sins can be imputed to Christ, then His righteousness can be imputed to us. (Then you have a forensic understanding of justification.) Rather, salvation is through the self-offering of Christ into which man is brought and thus man is saved as the one who offers himself, of course enabled by Christ’s self-offering. There is grace, but grace enables you to do what you ought to do, through the transformation of the sinner, not by the forgiveness of sins.

Ratzinger’s understanding of the atonement in the Lord’s Supper is then not about the receiving of forgiveness of sins, but at its center is an act of thanksgiving. It is Christ’s thanksgiving and self-giving and it becomes then man’s thanksgiving self-offering through Christ. So, though Ratzinger is certainly not merely a rehash of earlier theology, there remains a fundamental difference between his theology and the theology of the Book of Concord. Therefore, in understanding Christ’s death as punishment for sins, Ratzinger is not a resource that can help us.

So is the pope [Roman] Catholic? Of course.