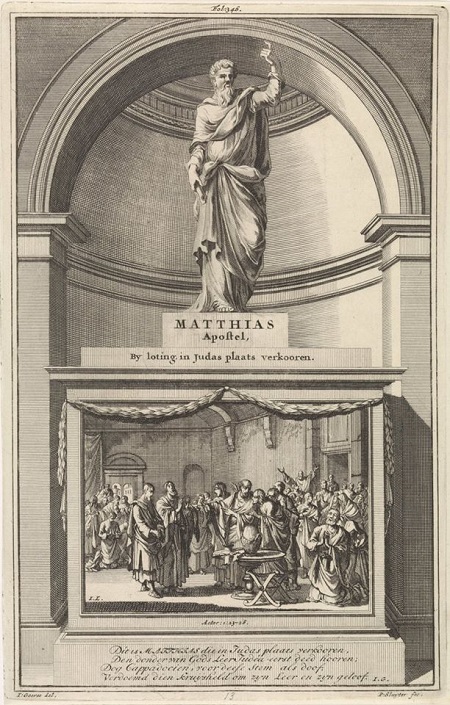 Today is the Feast of St. Matthias, Apostle, and—like all feasts and festivals (as well as commemorations)—is designed to turn our eyes to Christ Jesus our Lord. While commemorations serve to remember a broad range of the saints and events across history that help us proclaim Christ, feasts/festivals are a remembrance of those events and people whose earthly lives were intertwined with the earthly life and ministry of Christ. From the LCMS Worship Library on “Commemorations Questions and Answers”:

These days are really treated as ‘Feasts of Christ,’ that is to say, as days when we remember, celebrate, and give thanks for the life that our Lord Jesus Christ lived for us in the flesh. For these reasons, it is appropriate to observe these ‘Feasts’ with the Sacrament of the Altar, in which the Word-made-flesh draws close to us and gives himself to us in much the same way that he came and lived among the apostles and other disciples in the New Testament.

Matthias was the apostle chosen to replace Judas in the early days of the Christian Church. He is, in many ways, the forgotten apostle, showing up by name only in the first chapter of Acts. What little we know comes from Peter’s words in Acts 1:21-26:

“So one of the men who have accompanied us during all the time that the Lord Jesus went in and out among us, beginning from the baptism of John until the day when he was taken up from us—one of these men must become with us a witness to his resurrection.’ And they put forward two, Joseph called Barsabbas, who was also called Justus, and Matthias. And they prayed and said, ‘You, Lord, who know the hearts of all, show which one of these two you have chosen to take the place in this ministry and apostleship from which Judas turned aside to go to his own place.’ And they cast lots for them, and the lot fell on Matthias, and he was numbered with the eleven apostles.”

From Rev. James Gier’s sermon during daily chapel this morning:

Well that’s about all we know about [Matthias], really. There is nothing else spiritually, other than perhaps he was one of the 72. There is little else historically. Some place him in Ethiopia, others have him bringing the faith to Armenia, known as the first nation to accept Christianity. It was said that he was martyred in Asia Minor, but that his final resting place is the great cathedral of Trier in Germany, making him, then, the only apostle buried north of the Alps… Believed martyred, he is not knowingly sawn in two, beheaded, crucified upside down, or had his skin handed to him, literally.

We do know that he was called by lot to take the place of Judas. We do know there were qualifications given for his nomination, if you will. He must be a man, one of male configuration, and one who was among them from the baptism of John to Christ’s ascension into heaven, as a legitimate witness to Jesus’ resurrection. So then where does that lead us to preach on him? A rather obscure fellow… St. Matthias, the apostle of the short end of the stick.

“Soon some of you will be called by lot and ordained into the same office, though as pastor and teacher, called not by the luck or bad luck of the draw, but by the Lord Himself to His Church. For Jesus says (and hear him carefully), “You did not choose me, but I chose you and appointed you that you should go and bear fruit and that your fruit should abide” (John 15:16).

Therefore, this is not an office of your choosing anymore than it was for Matthias. Jesus does not appoint for obscure reasons. He chooses the foolish to confound the wise. That it is not by your choice is more important than you may first think, for anything that is by your choice ends up as a product of your will, and the ministry is anything but your will. And certainly you made decisions to get here, but those are secondary to the call that’s already happening. There is truth in this with God: you can run, but you cannot hide…

It ought be safely deduced that Matthias was all present with the other Eleven in the New Testament witness, beginning with Pentecost, where he also, then, was preaching in tongues to the Diaspora Jews and to the Jerusalem Jews. And where apostle Peter delivers a crushing and potentially fatally offensive punch line: “Let all the house of Israel therefore know for certain that God has made him both Lord and Christ, this Jesus whom you crucified” (Acts 2:36)…

Other than a few who followed [Christ], Israel rejected Him and His ministry. Yet he says, “I thank you, Father, Lord of heaven and earth, that you have hidden these things from the wise and understanding and revealed them to little children; yes, Father, for such was your gracious will” (Luke 10:21). This is hard for us to understand. Jesus praising the gracious will of the Father, that to some the salvation mystery is hidden, and that to others it is revealed.

Then the reasons come: to the wise and understanding who regard themselves as self-sufficient and so refuse, then, to acknowledge their complete need for God and His saving righteousness, to them it is hidden. But to those who acknowledge their utter dependence and need for divine grace, equated with infants—little children—the mystery of salvation in Christ is revealed. And so this is what makes for the days of a pastor. It is always by the Father’s gracious will and not your own, or you will martyr yourself in the office, and the short end of the stick in your hand is your doing.

The call is to sow and water with the Word. But only God gives the growth. And that growth is not your burden, it is by the will of God alone, the Father accomplishing the purpose for which He has sent His Word and will send you one day to preach it: the salvation mystery in Christ, hiding it from some and revealing it to others.

So then where does this lead us? I’m afraid, still, a little bit obscure. But that seems to be somewhat of the theme with Matthias. But it leaves me at a different place: at the bedside of my dying father, suffering from the same illness and treatments as I did just six weeks previous to him…

How do you minister to a man reduced again to the feeble helplessness of an infant, sedated, unable to accomplish anything for himself, even the slightest encouraging nod to the spoken Word? Questions arise: have I said enough? Have I prayed enough? Have I ministered enough? What sign is there to know? And with each question the office grew heavier, and the burden intensified.

The assurance of a blessed heavenly end was now as much for me as it was for him. I was in the same, utter dependence and need for divine grace in that office, as for the infant before me, to whom God reveals it. Same child-like faith, in the same Word, the Word that promises that the good work God had begun in him in Baptism, He will bring it to completion on the day of Jesus Christ. Faith, now, not in my father’s faith, but in my heavenly Father’s divine grace for his faith and for mine…

When my father passed, there was incredible peace, and the burden of his sin was finally lifted. And mine too. The divine grace that allows me more time to minister on earth is the same that took my father to heaven, now numbered among the saints in heaven, including Matthias. And that is anything but obscure. It is just as true in the office as it is in faith. His yoke is easy, and His burden is light, and now that seemingly short stick in your hand reveals itself for what it really is: the yoke of Christ. And you will find rest for your souls.