By Jason L. Iwen, Assistant to the Chief Information Officer at CTSFW and Second-Year MDiv Student; he was in Kramer Chapel on Call Night to help with recording directions for the faculty and kantors. 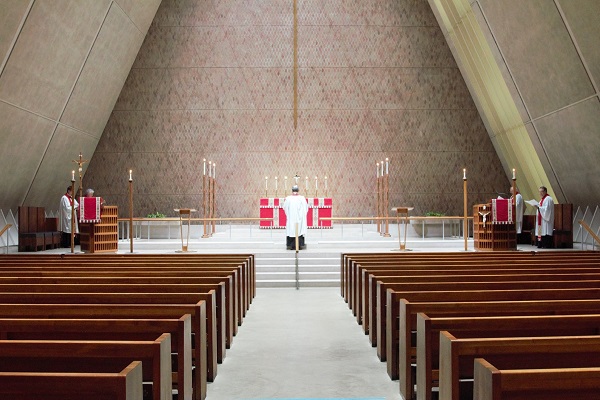 If you’ve ever been in Kramer Chapel on call night, you know that it is anything but silent before the service begins. The room is filled with energy as old friends greet one another. Family members discuss the possibility of being placed near a beach or mountains. Professors joke with them that they will instead end up in rural Nebraska or the frozen tundra of North Dakota. Laughter and joy-filled conversation—this is what Kramer Chapel is supposed to sound like before the call service begins. This year, however, was much different. This year, silence is what surrounded the eight of us who were physically in Kramer Chapel for the service. The difference between this night and all previous call nights was striking.

In the chancel: Dr. Grime lights the candles. He does so in silence.

In the pulpit: Dr. Rast stands awaiting my cue to begin his words of introduction and welcome. He stands in silence.

In the aisle near the baptismal font: Dr. Bushur (who is holding the crucifix), Dr. Pulse, and Dr. Zieroth all wait for the appointed time to begin the procession. They stand in silence.

In the choir loft: Kantor Hildebrand sits at the organ console, and Kantor Machemer stands ready for the service to begin. They, too, wait in silence.

Certainly, there are brief conversations as the appointed time approaches. Mostly, though, it is the silence that crowds my memory—because silence is not what should be filling Kramer Chapel on this night.

We finally get a reprieve from the silence. The clock strikes seven, and the service begins with Dr. Rast’s opening remarks, followed by the processional hymn. Those of us in the chapel are able to hear the hymn, even though it isn’t happening live in that space. And the room is filled once again with the glorious sounds of music made by the saints of God. I close my eyes and envision the room full of people, as we all had hoped it would be on this night.

To be sure, many of the other parts of the service do not fill the chapel with the sound we are all accustomed to hearing. But at least it isn’t silent. The Word of God is proclaimed through the reading of Scripture and through Dr. Rast’s wonderful sermon. It is also proclaimed in song, and the music is wonderful to my ears—even when it is not happening live in the chapel. When the hearts of all God’s faithful children from around the entire country – indeed, the entire world – join together with those of us praying in the chapel, those prayers rise as incense before God, and we know that He hears them.

During all of these portions of the service, the silence is gone, and Kramer Chapel sounds a little bit like it should on call night.

When the reading of names and placements commences, however, the silence returns. Each time a name is read, it is followed by silence. I know that the reason for this silence is to allow time for those viewing the service from home to see the person who has just been named, and where they are being sent. Not having that visual, though, I am only able to see the silence. As the announcements continue from vicarages – to deaconess internships – to deaconess placements – to candidate calls, the silence intensifies and becomes almost deafening. It intensifies to the point that I can almost touch it.

There is a part of me that wishes that I had been able to see the video of this service as it was happening. But I know that I was where I needed to be for this event. Making this service a reality took a team of people—each of us in a different role and all of us doing our very best to make it the best that it could possibly be. We had many reasons to set the bar so high. We wanted this to be a special service for all those men and women receiving placements, and for their families. We wanted this to be a special service for the congregations receiving vicars, deaconess interns and deaconesses, and pastors. Above all, we wanted God to be glorified in this service. I believe He blessed those efforts, and I feel truly privileged and blessed to have been a part of it!