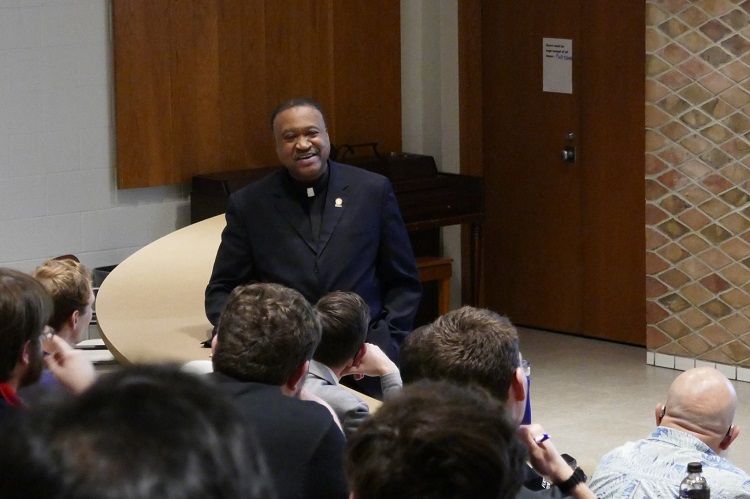 Last week, following chapel on Wednesday, the Rev. Dr. Roosevelt Gray Jr., Director of LCMS Black Ministry, led convocation on the history of Synod’s work with African Americans. Dr. Gray graduated from CTSFW in 1988, receiving an honorary doctorate from the Seminary in 2015.

His first call after graduation was to Houston, where he served until 1994. “Get involved in agencies of the community,” he advised the seminarians in the audience, speaking from his own experience. He’d volunteer to read to the kids at nearby schools, attend local events, and would go to funeral homes, hand them his card, and say, “I can’t do anything about the dead, but I can do something for the living.” Funeral directors would call him when a family who had no pastor needed pastoral care. The church grew by leaps and bounds. “Wow!” Dr. Gray exclaimed, “Evangelism does work!” which got a particularly appreciative laugh from the students.

And though he spoke of the tenacity and love a pastor must have for his community, every time he also came back to the same point: that witness and mercy work is about sharing the Good News that Jesus Christ died for our sins. “In the Great Commission, Jesus was speaking to Galileans—and speaking to Lutherans,” he said. “We cannot be ashamed or afraid.”

Black Ministry’s history is nearly as old as the LCMS, serving the longest existing ethnic group in our church body (“Besides the Germans,” Dr. Gray pointed out with a laugh, reminding his audience that “We’re all ethnic people.”). In 1877, only 30 years after the Synod had formed, the sixth convention of the Synodical Conference unanimously resolved to begin mission work among blacks, particularly in the southern and southeastern districts where the slave trade had driven African migration to the United States. Mission efforts were educationally-focused, meant to bring the Good News and schooling to a people in desperate need of both. With the Civil War barely in the rear view mirror, freed African Americans were still living in slave-like conditions, denied basic rights under “Black Laws” and without access to education or jobs. They were impoverished, physically and spiritually.

Mission work started with their children. In 1878, a Lutheran Sunday School was organized in Little Rock, Arkansas (St. Paul Colored Lutheran Church would be built in Little Rock years later), and the first black Lutheran parochial school opened in the fall of 1879. Every new mission they started (traveling further and further south) was connected with a school.

In 1889, four black pastors attended the North Carolina Synod convention as voting members. The committee on “Work among the Freedmen” recommended that “the colored brethren connected with this Synod be allowed to form themselves into a synod.” The Alpha Synod of the Evangelical Lutheran Church of Freedman in America formed on May 8, 1889 (and would later be merged back into the LCMS). By 1926, the Carolinas had increased from five black congregations to 23, served by 16 pastors and professors (four times the original four), and started seven day schools and Immanuel Lutheran College.

Rosa Young, arguably the most famous figure involved in early Black Ministry (specifically in Alabama), made herself known to the LCMS in the early 1900s. Born in 1890 in Rosebud, Alabama, Rosa was a schoolteacher who saw her people “groping in spiritual darkness.” When the cotton boll weevil invaded Wilcox County in 1914, devastating an already impoverished area, she wrote to Dr. Booker T. Washington for help. He suggested she write to the LCMS for assistance, as he knew of the Synod’s reputation for educational work among blacks in the south.

The partnership blossomed quickly. She turned her school, the Rosebud Literacy and Industrial School, over to the LCMS shortly after the mission board sent assistance, which then became Christ Lutheran Church and School and the mother church of black Lutheranism in Alabama. Together, Rosa and the pastors and teachers sent to the area ultimately planted 30 schools and 35 congregations in Alabama and Pensacola, Florida. Concordia College in Selma, Alabama, eventually grew from these endeavors.

“I hunted lost souls for Jesus somewhat as I hunted for money to build and maintain my first school,” she wrote in her autobiography. When speaking of the deplorable ignorance of her people and the immoral spiritual leaders who had failed them, she explained, “None of them ever told us: Christ is your Savior, who died for your sins. Believe in Him, then you are saved.”

Dr. Gray explained that there are third and fourth generation African American Lutherans, in places so geographically and culturally isolated (such as St. James in Buena Vista, Alabama, begun by Rosa Young as a Sunday School), that the members there have never seen a white Lutheran. “They think the LCMS is a black church,” he explained, then got another laugh when he immediately added: “Don’t tell them!” His own wife is a fifth or sixth generation Lutheran.

“This [Synod] has done powerful work,” Dr. Gray said, especially considering that the LCMS was still very young and very small when it started reaching out to African American communities. “But we have to revisit that.” Concordia College Alabama has closed, as have other major LCMS institutes that served black populations. The parish he served over 30 years ago has closed too. “Lutheranism is growing faster among Africans than African Americans,” he said.

“The Lutheran Church is the whitest church in America,” Dr. Gray went on, citing the statistics. Fourteen percent of the US population identify as “Black only” or “Black in combination with another race,” but only 3% of LCMS membership identifies as such. With two million baptized members, this means only 60,000 of our membership is black.

“11 a.m. Sunday morning is the most segregated time in America,” Dr. Gray pointed out. “We worship separately. We plant Hispanic churches, Black churches.” Sometimes that’s due to a language barrier, but too often it’s because we simply don’t know how to talk with people from different cultures, ethnicities, or backgrounds.

Black Ministry exists to reach out with the Good News of Christ’s death and resurrection, to bring more people into the Kingdom by engaging with those broken, destitute, and trapped by the challenges unique to their background. For African Americans, that’s racism, poverty, discrimination, and family structure. Dr. Gray explained engagement in very simple terms. “Be culturally sensitive to the community you serve. It doesn’t mean you give in—but be sensitive to it, and then get on to serving the Church.”

Much of Dr. Gray’s insights come from his own experience in the parish, especially that first call out to Houston. “Thank God for two elders who taught me how to be a pastor. I learned great, great theology from the Seminary, but gained my experience in that church, learning to work with people who are broken every day. A lot of sinners out there are angry at the Church.”

He recalled one young woman with two children, who came from a rough background and got involved with the church because of their childcare resources. At one point, Dr. Gray was tempted to kick her out. He spoke about it with his elders, who urged him not to, wanting to keep that contact point with her children even if their mother was already lost.

“One of my elders said something I’ll never forget,” Dr. Gray recalled: “’You go fishing, let us do the cleaning.’” In short, they urged him to do what he excelled at (going out into the community to witness, bringing folks into the church), and they in turn would do their part (keeping them in the church, by spending years walking them through their particular issues). “Your elders and your laypeople are not against you, they’re for you,” Dr. Gray said, speaking directly to the seminarians. “And they don’t care about how much you know until they know you care.

“That church taught me how to love people. It’s easy to push people into the well,” he added, then explained how tempting it is to prioritize fighting against the particular sins we don’t like rather than sharing the Good News. “It’s ‘For God so loved the world that He gave…’ not ‘For God so hated sin that…” Dr. Gray pointed out. “The solution to the preponderance of your sin must be the Gospel. The Law does not save you.”

“Give them Jesus, brothers,” Dr. Gray said to the seminarians, his future colleagues. “The Law has already done the work in their lives. You’ve got to preach the Law,” he conceded, “but the Law won’t change them. I am not ashamed of this Gospel,” he repeated, a common refrain and theme of the convocation. It is a bludgeon against fear and hopelessness.

LCMS Black Ministry began only 30 years after the Synod formed, when they had few resources in terms of both money and men. Only that’s not precisely true. We had – and still have – everything we need. “We have the resources,” Dr. Gray explained simply: “We have the Gospel.”

If you would like to learn more about the history of Black Ministry, you can click on the following articles:

The History of LCMS Mercy Work with African Americans

Formed for Service: The Work of Rosa Jinsey Young

You can also learn more at www.lcms.org/blackministry.