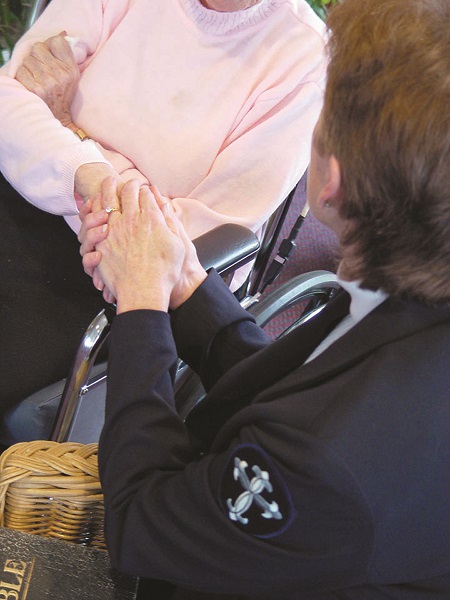 The roots of the office of deaconess go back to the first two verses of Romans 16, when Paul commends to the saints at Rome “our sister Phoebe, a servant of the church at Cenchreae…for she has been a patron of many and of myself.”

Some 1,800 years after Paul wrote this letter to the Romans, Lutheran deaconesses in Germany were bringing aid to widows, orphans, and the sick and disadvantaged in response to the hardships that arose from the industrial revolution. These trained church workers particularly cared for women in distress, serving in girls’ schools, hospitals, homes for the mentally ill, and in training schools for teachers and deaconesses. Today, deaconesses function in much the same roles: as nurses, social workers, and parish assistants to pastors in a congregation.

However, when the LCMS came into being in Chicago in 1847, though the new Synod was well aware of the work of deaconesses from reports back in Germany, they were wary of doctrinal issues and cautious about beginning a training program on new soil. Some had accused (not always wrongly) deaconesses of being a copy of the Roman Catholic nuns, while others feared that training female diaconate would bring unbiblical ideas and practices into the Church.

For decades, the LCMS essentially left the issue alone. Each congregation cared for the needs of their own flocks, though as populations and need grew they began banding together into welfare societies and institutes that served wider geographic areas. In 1904, the Associated Lutheran Charities brought together every synodical agency involved in charity work and convened for their first convention. By 1908, a couple of pastors in the association noted that other Christian denominations used trained deaconesses to great advantage, and began the conversation of how to secure trained deaconesses for the Lutheran church. The suggested answer: “Why not begin the training of deaconesses for our work?”

Synod was not immediately enthusiastic. Though they recognized the gifts and talents of women in mercy work, officially recognizing a female diaconate and training deaconesses for service remained controversial because of the history of doctrinal issues associated with the role. In 1911, Rev. Herzberger, the first urban missionary installed in Missouri (and one of the pastors in the 1908 conversation), addressed Synod at Convention, hoping for their blessing on the creation of a Deaconess Home. He said (in part):

“We emphasize that this be a Lutheran Deaconess home. The representatives and supporters of this Lutheran Deaconess Home do not want it to be from the unbiblical Deaconess existence such as found in the days among the “schwaermer” schismatic and pseudo Lutherans who would have nothing more than a Protestant nunnery…

“What motivated the representatives of this conference to plan such a Deaconess Home is not because of business or to look for something new, but because of a crying need of the many places that desire such Deaconess ministry. Our Lutheran hospitals and boarding schools especially desire them. How greatly feminine care makes itself felt. Often it is difficult to obtain such a woman leader (head nurse) or Director in our Institutions.”

Synod didn’t reject the idea of the home, but neither did they give it their blessing. The committee that responded to the matter recommended that Synod not take the existence of the Deaconess matter into their own hands though a synodical committee should oversee and safeguard any such program from “getting out of hand.” The committee also requested “that Synod promise this establishment in the Lutheran—that is Biblical spirit—from the beginning and while in operation. Since Deaconesses, especially in our times, would find a blessed circle of activities in the hospital, in city missions as care givers for the sick and the poor in our congregations, in our mission to the heathen, being recognized as care givers they could bear witness to the Gospel in the course of their service of mercy.”

Four months later, Rev. Herzberger expounded on the scriptural and historical basis of a confessional Lutheran diaconate. Only notes from the presentation, written down by a pastor in attendance (the Rev. Herman Bernard Kohlmeier), remain. Seven alphabetized points summarized Rev. Herzberger’s main arguments, three of which were:

A. There is only one divinely instituted office, the holy ministry. All other offices are auxiliary offices, and may be established, changed, abrogated by the church as she deems best for her welfare.

B. The office of the female diaconate is such an office. It flourished in the early Christian church, lost its character, however, and disappeared under popery, and has been re-established in some parts of Christendom in our time.

E. It is not implied that deaconesses are a special spiritual order in the church, nor serving in the ministry. Scripture bars women from the office of the ministry but they can exercise the right and obligations of the priesthood of believers. Therefore deaconesses give instruction, admonition, comfort of Scriptures as the situation requires.

The presentation kept the discussion alive in Lutheran circles for the next eight years, while Rev. Herzberger (and others with the Associated Lutheran Charities) wrote letters to the presidents of districts and Synods affiliated with the Synodical Conference. These men began to express their support for a deaconess training school. In 1918/19, Rev. Herzberger wrote a tract on “Woman’s Work in the Church,” expanding on these points:

“So we learn direct from Scripture [earlier in the tract he referenced Romans 16:1 and 2 as well as the saintly widows in 1 Tim. 5:9 and 10] that it was customary for the congregations in times of the Apostles to employ women workers! They were servants of the particular congregation in which they labored and were under the jurisdiction of the local congregation and assistants of the pastor or bishop. It is of the highest importance to remember that fact that the female diaconate is an auxiliary office of the Holy Ministry…there is but ONE divinely created office in the Church viz. the office of the Holy Ministry. The pastor is exclusively THE teacher, THE shepherd and overseer of his congregation and will have to give an account to God for his stewardship. (Acts 20:28; I Peter 5:1-3; Hebrews 13:17). Because of that fact all other offices in the Church are but human ordinances. They can and ought to be created as exigency and the welfare of the local congregations demands. But they must all have their root in the divinely appointed Ministry and stand in vital relation to it…

“The Apostle Peter tells us emphatically, I Peter 3:7: “that Christian women are heirs together with the men of the grace of life” and hence, they belong to that “chosen generation and royal priesthood” of which he speaks in his second chapter, “who are to show forth the praises of Him who called them out of darkness into His marvelous light.” On account of their SPIRITUAL PRIESTHOOD women have the same call to labor in the Church of Christ that Christian men have. There is but one limitation—imposed by the Lord of the harvest Himself—they are not to preach the Gospel in public worship [I Cor. 14:34-35 and I Timothy 2:11-14)…

“Our sorrow grows greater when we think of the many opportunities we miss for winning souls for Christ because of our NEGLECT in training and supporting gifted and pious women in our midst for missionary and charitable work. The World War may be over, but the sad conditions it has created in all ranks of society are not over! If ever the Church of Christ was called upon to bend every effort for the saving and uplifting of redeemed souls that time is NOW!”

Diaconal service grows from the mercy so richly poured out on undeserving sinners. “Mercy is central to who God is, as evidenced in the Father’s compassionate giving of His Son, in Christ’s bearing of our sins, and His sacrificial work on the cross for us, and in the faith-creating and sustaining work of the Spirit,” Associate Director of the Deaconess Formation Programs at CTSFW, Deaconess Amy Rast, would write nearly a hundred years later. “Mercy is a way of life for God’s people, as they respond to His mercy in faith toward Him and in love toward one another. Therefore, mercy is central to the life of a deaconess as she attends to physical needs, shares God’s Word, teaches the faith, encourages believers in the Christian life, consoles the suffering, confronts the sinning, and tells the Good News of salvation. CTSFW Deaconesses teach, reach, and care—and that is a life of mercy.”

Years of writing letters, giving presentations, and persistently teaching the Biblical basis of the role of women in the Church and their work as members of the royal priesthood met with success. One hundred years and one month ago, on August 17, 1919, the Lutheran Deaconess Association was formed at a meeting held at St. Paul’s Evangelical Lutheran Church in Fort Wayne. Diaconal training in the LCMS had begun.

Today’s history lessons was summarized with quotes ransacked (save for the quote from Deaconess Rast) from the first chapter of “In the Footsteps of Phoebe” by Cheryl D. Naumann (CPH, 2009).