We’re three weeks into the academic year at CTSFW with a number of events to show for it. We have visitors on campus for the second-to-last continuing education course of the season, our distance students from the Specific Ministry Pastor (SMP) Program here for a week of intensive courses, and by this Saturday both groups will be gone, only to be replaced by the Fall Retreat attendees who will be on campus all day Saturday and half day Sunday.

The SMP students spend much of their first day together, but by Tuesday and for the rest of the week before returning to their respective homes to continue courses online, working with their mentors, they’ll spend most of their time in their own classes. Pictured is Dr. Benjamin Mayes with the first-year SMP students as they tackle the Lutheran Confessions: Intro and Overview. Each day begins with early breakfast then Morning Office in chapel at 7:35 a.m., followed by a two hour class until daily chapel at 10, an hour long class at 11, with a three and a half hour class to finish out the learning for the day. Each day concludes with Evening Office in chapel at 6. Wives also take a handful of classes (most of them about networking and support) when they accompany their husbands to campus, though their days are less rigorously scheduled as they have time to see the campus, the city, and to fellowship with one another. 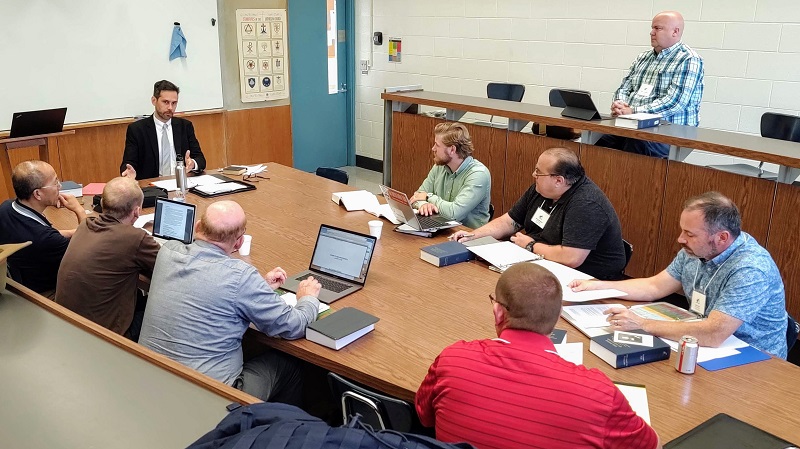 This year’s continuing education course with Dr. John Kleinig (who makes the journey from Luther Seminary in Australia to Concordia Theology Seminary in Fort Wayne every year) is on “The Role of Choral Music in the Divine Service According to Chronicles and the New Testament.”  He has covered many facets of the discussion, from historical use of instruments in worship to the arrangement and rites of the Divine Service (as per the Old Testament in Exodus, Leviticus, and the Books of Chronicles). Dr. Kleinig teaches not only the description of these rites but their theological significance as well in the Lord’s coming to His people to bless them and to dwell among them.

For example, as opposed to the teachings of pagan worship (that choral music in worship is entertainment for the gods, to put them in a good mood) as well as Pentecostalism (that worship is primarily praise singing to help ascend—via the Holy Spirit—into the heavenly realm), the true role of choral music can be found in Psalms and Exodus: “My tongue will sing of your word” (Psalm 119:172) and “The Lord descended in the cloud and stood with him there, and proclaimed the name of the Lord. The Lord passed before him and proclaimed, ‘The Lord, the Lord, a God merciful and gracious, slow to anger and abounding in steadfast love and faithfulness, keeping steadfast love for thousands, forgiving iniquity and transgression and sin, but who will by no means clear the guilty…’” (Exodus 34:5-7). We sing His name as a proclamation of who He is, and to proclaim the richness of the grace He has poured out on His people.

From his Logia article “Bach, Chronicles and Church Music,” Dr. Kleinig noted that the common refrain “O give thanks to the Lord, for he is good, for his mercy endures forever” found throughout Chronicles does three things:

“First, they invoked God by using his holy name: Yahweh, translated as Lord in English. They, as it were, identified him and introduced him by name to the congregation, so that the people had access to him there through his holy name. Secondly, they praised the Lord. They did not address their praise to God but to the congregation. In their praise they sang about his goodness and proclaimed his loving kindness to the assembled congregation, even as they stood in God’s presence…Thirdly, as is shown by the psalm given in 1 Chronicles 16:8-36, the singers called on the congregation, all the nations, and the whole of creation to join them in acknowledging God’s gracious presence with his people and in praising him for his steadfast love for them and his whole creation…

“[The theology of praise in Chronicles] connects the glorious presence of God with the performance of praise at the temple. Like the sun behind a dark cloud, God’s presence with his people is hidden from their sight. In fact, God conceals himself in order to reveal himself to them, without dazzling, overwhelming, and annihilating them. His glory remains hidden from them until it is revealed by the performance of praise. Praise announces God’s invisible presence.”

The doxology performs the same function. “The naming of God in these doxologies serves a very important ritual and theological function,” he wrote in another essay, The Mystery of the Doxology. “It identifies him by name and accounts his presence. More importantly, it also acknowledges that access to his divine presence and glory is gained by the invocation of that name rather than by contact with an idol…by performing that doxology, we tell the world that in and through the risen Lord Jesus we have access to heaven here on earth; we acknowledge, laud and proclaim the gracious presence of the Triune God with us.” 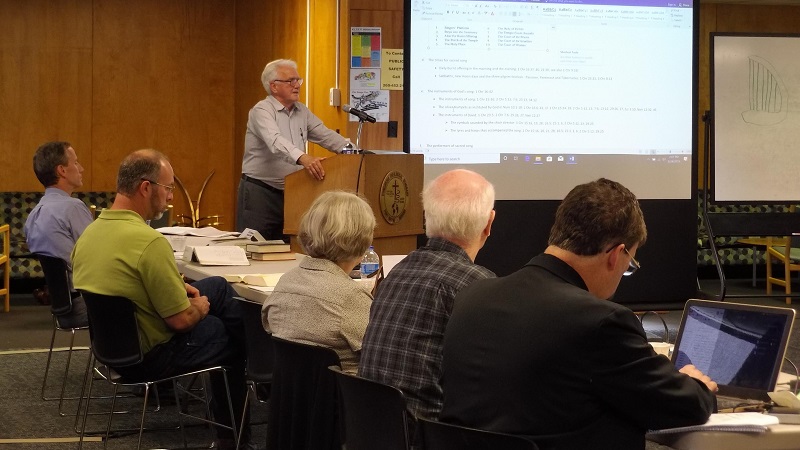 The course will continue through tomorrow, the 25th. This is not, however, the last opportunity for theological learning here on campus this month. You can still register for the course on angels and the Book of Revelation that is coming up this weekend, September 28-29. Learn more and register at www.ctsfw.edu/fallretreat. For those of you too far out of reach, you will at least be able to watch the livestream of Choral Vespers on Sunday, September 29, at 4 p.m. Eastern Time, celebrating St. Michael and All Angels.