The 43rd Annual Symposium on the Lutheran Confessions on the theme of “Ecclesiology: Locating Confessional Boundaries” opened with LCMS President, Dr. Matthew Harrison, on the topic of “Hermann Sasse: A Stand Alone Lutheran.” 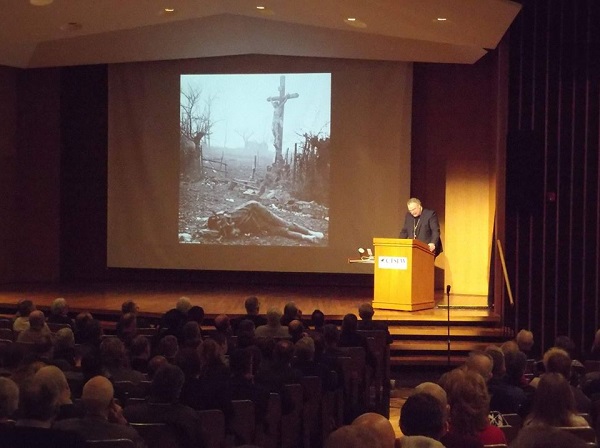 Hermann Sasse was a theologian. He served in WWI as a chaplain, after which he served and worked in Berlin. He first publicly criticized the Nazi party in 1932. He was harassed, punished financially, but survived the party.

WWI was a turning point for Sasse for several reasons: for the great losses he had seen and suffered in the war, and for the Lutheran renaissance that was taking place around the same time. He wrote: “We who had been students of Holl suddenly began to realize that the Lutheran Reformation meant something also for modern mankind. ‘ Man is nothing, and nothing is left to us but to despair of ourselves and hope in Christ.’ This word of Luther’s became important to our generation.”

Following WWI, he served in Berlin in desperate circumstances. He also studied in America, where he saw the downfall of American Christianity was the secularization of the church. “Worship has been, as we say, developed. There must always be something new and everything must be affected.” Music had to be affecting, light had to, liturgy had to. American churches aimed to meet their business goals. They acted as societies. In this secular mish-mash or protestant America, Sasse entered into the ecumenical movement (worldwide Christian unity/cooperation). But how different churches answer the questions of Church order and where authority comes from had practical consequences.

Christ is not an intermediate being but very God. Where is Christ, there’s the Church. “First our mouths are dumb, then he [the Lord] speaks. If we with our wisdom and our power are at an end, then he speaks his great Word to us: “Behold, I am with you always, until the end of the age!” [Matthew 28] With these words he once sent his apostles into the world, to tasks which humanly speaking were impossible, to destinations, which they knew not. And they joyously went the unknown way. They knew that his forgiveness, his peace, his power were with them. “Behold, I am with always”—this is the mystery of the church. For upon what does the church rest?”

Where do we find Christ? Sasse saw that a concrete, classical, Christology is the only remedy for theologies that saw in the New Testament only pietism and useful ethics. Sasse saw several attempts to Christianize the world, which goes against the Word of God (what we recognize as the doctrine of the two kingdoms). That, per Article 16, “the gospel should not enthrone or remove kings, nor do away with secular obedience, or prescribe laws for secular power and secular affairs. As Christ said, ‘My kingdom is not of this world.’”

Attempts to Christianize the world will only secularize the Church.

The question of the ecclesiastical office (relating to the church/its clergy/hierarchy) has practical consequences depending on how you answer it. Sasse asserts that Lutheran doctrine says something useful, though it’s only a beginning. That:

1. The priesthood was first introduced in connection with the doctrine of the sacrifice of the mass (1 Peter 2:9 and Revelation 1:6).

2. The office can never be derived from the general priesthood of believers, but only from the apostolate.

3. “Apostle” appears in the NT with a double meaning: a.) messenger, and b.) the strictly theological usage in Acts and Paul regarding his office.

4. The essence of prophecy is the struggle between error and truth. In the NT, prophecy has become a discreet church office, the apostolic office now superior to prophecy. In the NT there are binding rules for the church’s present constitution. The office which keeps doctrine pure is maintained.

5. The Church of Christ appears in the congregation sanctorum; in the ministry docendi evangelii et porrigendi sacramenta (note here: forgive my misspellings; corrections that commenters post will be incorporated). The office is a divine institution. The apostles never conferred this Christ-given authority to a congregation but from person to person.

How is the Lutheran view of the office distinguished from other views? The proclamation of the Gospel belongs to the essence of the Church. The Law is completely subordinate to the Gospel. The office is established as the gift of God to humanity and this office has nothing to give beyond the Gospel (office of the keys).

This is only a summarized part of the first half of Dr. Harrison’s lecture. You can watch the full lecture (and all the rest) online by purchasing livestream access for $20 at www.ctsfw.edu/symposia-livestream.