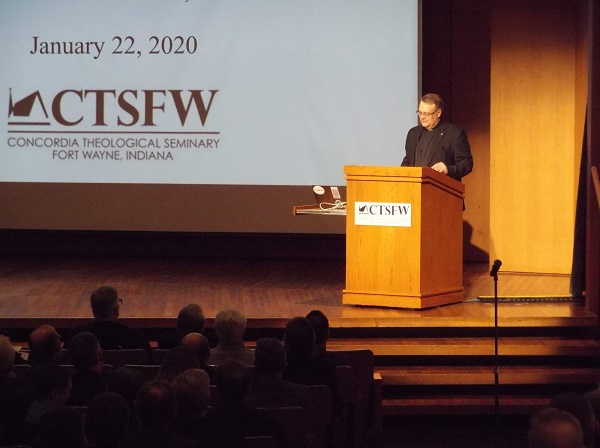 ‘When he ascended on high he led a host of captives,
and he gave gifts to men.’

(In saying, ‘He ascended,’ what does it mean but that he had also descended into the lower regions, the earth? He who descended is the one who also ascended far above all the heavens, that he might fill all things.) And he gave the apostles, the prophets, the evangelists, the shepherds and teachers, to equip the saints for the work of ministry, for building up the body of Christ, until we all attain to the unity of the faith and of the knowledge of the Son of God, to mature manhood, to the measure of the stature of the fullness of Christ, so that we may no longer be children, tossed to and fro by the waves and carried about by every wind of doctrine, by human cunning, by craftiness in deceitful schemes.”

They key phrase of this passage: “until we all attain to the unity of…” There’s the implied “Now and not yet,” in it. And why do we strive to all attain it? “That we may no longer be children, tossed to and fro by the waves and carried about by every wind of doctrine…”

The Church is God’s gift, and as God’s gift is divine. But it is a mess. The Synod is a mess. You are a mess. And above all, I am a mess. The good news is this: God is not a mess. He’s busy at work building His Church, even if it is hard for us to see it at times.

How do Synods fit into all this? Take our own history of presidential overturns in our history. The first time was in 1935: John Behnken unseated Friedrich Pfotenhauer.
1969: J.A.O. Preus defeats Oliver Harms
1992: A.L. Barry captures the presidency from Ralph Bohlmann
2010: Matthew Harrison defeats Gerald Kieschnick on the first ballot

These kinds of events call for an assessment on part of the church body. Why is our Synod so at odds? In 1969, both men were gracious. Jack Preus denounced politicking, and Oliver Harms graciously passed his presidency to his successor. However, shortly following a pastor and his congregation left the Synod, following the publication of, “Why True Christians in the Missouri Synod are Conscience-Bound to Leave Missouri.” Then in the 1992 unseating, Ralph Bohlmann publicly called the actions of his adversary (and/or his supporters) leading up to the vote as sinful.

Why do we spend so much money on these when the real work of the Church is the preaching of the Gospel and the administration of the Sacraments, which happens at the local congregational level? Because though the Church is a divine gift, but that gift is lived out in the context of sinful man.

Dr. Rast then went on to detail much of our history of controversies, beginning from the formation (and pre-formation) of Synod. Wyneken pleaded with Synod to stay unified, but any unification was lost almost immediately. Goerg Schieferdecker (1815-1891) was the first to bring serious theological controversy. He began openly advocating a form of millennialism. In 1857, after he refused to recant his heretical position, he was de-vested and deposed from his congregation, made even harder by the fact that he was District President. However, in 1875 in Der Lutheraner he publicly denounced his former heresy and rejoined the LCMS in 1876 and served in the Missouri Synod for the rest of his life.

Then followed other controversies, like the error of predestination of the 1870s and 1880s, resulted in a reshuffling. Those who could not accept the LCMS’s position on the doctrine of election found an external synod that did agree with them. And those who were in other synods, like the Ohio synod, found their way into the Missouri Synod. You found the Synod that fit your confession. What changed? While the controversy of Schieferdecker’s millennialism was relatively tame, the later controversies were brutal. Arguments became personal and friendships were destroyed.

What begins to change in the movement into the 20th century is the way that this aligning on the part of individual pastors and laypeople shifts. Where previously you would seek the synod that best reflected your position, now people began to internally seek to change the position of their synod. That would lead to some significant challenges.

Flying past his storytelling (here’s my usual plug: if you want to watch it in full, purchase a $20 ticket for online access at www.ctsfw.edu/symposia-live) of our history of controversies, here’s what we conclude:

When one looks at the history of the Missouri synod, what we must avoid is a false romanticism that at one point all was good, all was unified, all was harmonious. To fall into that kind of temptation really keeps us from understanding what the Church is as the Church Militant. We have to strive every day with our own sinful flesh and have to work every day to work with one another and offer to the world the truth of the Gospel of Jesus Christ. That work never ends. It will always go on and we must always be engaged in it.

What history can show us in this: we don’t have to pine after something that never was. But we can still be encouraged that we gather here today at the grace of God. The Church is a divine gift, and Christ is the one who creates it and sustains it. We must strive to be faithful to it, to the Gospel, to Scripture until His return.