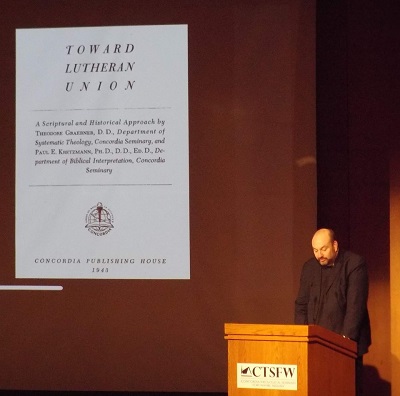 The religious scene in 1950 America: America is on the top of the world, everyone has children, and everything is looking up for American religion. The good guys won. The ecumenical movement is in full swing. Billy Graham is a study in American evangelicalism.

Formation of several synods in the 50s, 60s, and 70s. Controversies began and continued on, with issues ramping up and stacking one on the other. In truth, this was another lecture that involved telling historical stories, which makes summarizing and sharing difficult. Very compelling to listen to, but because of its dependence on details that lead one into the other, difficult to capture quickly by writing (particularly if you also want to be accurate).

And how did our American context shape the creation and the outcome of the three particular splits Rev. Peperkorn talked about? Once we have a sense of the history (you’ll have to watch the lecture to get this sense at www.ctsfw.edu/symposia-live), we then step back and gain some perspective:

The split in the 1950s was a result of the pick yourself up by your bootstraps individualism mentality while the 60s and 70s was the hippy freedom of the 60s and 70s. But what they had in common, whether they were moderates or conservatives: it was a question of autonomy. In each of these three groups, they held up the congregation as the only true expression of the church. Anything beyond it is advisory at best and intrusive at worst. All of these express an individuality that was getting lost as the LCMS was becoming larger. Saw the growth coming at the expense of right doctrine and practice. They wanted freedom to express or not express as they saw fit. Basically: “I do what I want and if I don’t what you do then I will take my things and go my way.”

This insistence on autonomy explains the impulse to split into different synods. Highlighted the American impulse to resent authority and trust local, individual governance. Here is the problem: on the one hand you have the clarion call for disciplinary action against pastors, teachers, etc. but at the very same time is the claim that only the local congregation is, properly speaking, “Church.” Only the local congregation could reproach.

There are three different approaches when dealing with controversies in the church: admit that the culture is changing and we have to change with it (typified by AELC); run everything by vote (essentially the politicization in the Missouri Synod: candidates, elections, with winners and losers; if you don’t like what happens, ignore it or work to win the vote next time); or separation, in which the only choice is to leave and form your own church or join one of the existing (OLC, LCR, and FAL).

These approaches beg different questions: Can there be such a thing as good politics in the Church? Is there any way to do it? Is leaving the church good or divisiveness? All three of these approaches are distinctly American and reflect our history and culture.

Indeed, every era of the church there are people who profess the Gospel in their specific circumstances. It’s impossible to answer how you would have lived and responded in a certain era without sounding a little like Peter in Matthew 26:33 in the same chapter in which he would deny Jesus three times: “Though they all fall away because of you, I will never fall away.”

The Church thrives under many different systems; even in tyrannical governments the Church survives. Christ our Lord calls us to be faithful in who and what we confess, urging us to be one just as He is one with the Father. At the same time, the only way we exist as a Church is living in forgiveness under the Gospel. The Church cannot survive unless we overlook and pardon many things. So we ask ourselves this question: How will we live under the Gospel together, calling each other to faithfulness in all things, while at the same time learning to overlook and pardon many things? Only time will tell.