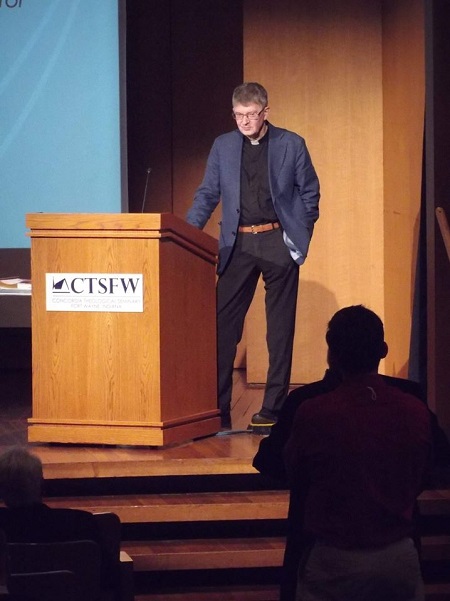 The question of whether mission provinces are truly Church or not is an important one to Dr. Rune Imberg. The Church of Sweden has, for decades (the roots going back even farther), been marginalizing the confessional theologians who cling to Scripture against the tide of liberal interpretation of Scripture, female ordination, and other denials of major biblical teachings, whose priests no longer proclaim the faith of the apostles, with biblical ethics abandoned for modern norms. The Bible is not recognized as the Word of God nor the highest authority in the Church. Thus the Mission Province of the Church of Sweden was formed so that conservative, confessional candidates could be ordained as pastors and could be led by confessional bishops, in order to preach the Gospel.

First he began with an important lesson from Church history:

A great number of the historical churches and church provinces had disappeared or were destroyed in the time before the Reformation, including: all North African churches (except for the Coptic church in Egypt); church in Turkey (only a tiny remnant remaining); most of the churches in the Middle East; most of the old Christianity in Persia/Asia at large; most of the Nestorian churches; most of the churches using the Syriac language. What remained were the Latin- and Greek-speaking churches, or second and third generation daughter churches.

They were destroyed in wars or persecution, especially under Persian, Moslem [especially Arab] and Mongolian rulers. At the time of Augustine (400 AD), Christianity was basically an Asian and N. African religion with a number of European Christians. By the Reformation (1520 AD), Christianity had become almost totally a European/Wester religion (with a Roman Catholic majority), remaining so up to the Napoleonic wars (1800 AD), when came a mission revival. Today (2020 AD), a majority of Christians now live in the south (Africa).

You can break this down into four main eras of Lutheranism:

Sweden became recognized as a Lutheran country in 1593; the Lutheran reformation process in Sweden lasted more than 70 years with five kings trying to influence it (either to promote, contain, or destroy). In 1958, the Church opened the ministry to female pastors, but still recognized the validity of the old, traditional position. The decision was taken by the Swedish parliament and the Church Assembly in union. In 1993, they then decided not to allow any new ministerial candidates for ordination who opposed the ordination of women. The mission province, having a confessional/Bible conservation foundation was created in 2003 and got its first bishops in 2005/2006.

You can read more about the history in CTQ article “A Light Shining in a Dark Place: Can a Confessional Lutheran Voice Still Be Heard in the Church of Sweden?” by Dr. Imberg here: http://www.ctsfw.net/…/pd…/ImbergLightShiningInDarkPlace.pdf.

In short: the Mission Province is a remnant (to quote Isaiah 61) in an old, historically very rich national church. There are many things we have to criticize in the Church of Sweden, but we must not forget its rich history. One example: “The Hammer of God” by Bo Giertz. We have to think of these things.

The Mission Province in Sweden wishes to exist and serve as a confessional, orthodox, Lutheran Church Body in Sweden, trying to function apart from the Constantinian elements hidden in both history, theology, and our minds. They exist as a faithful, confessional, theologically conservative remnant of the first era of Lutheranism, who are now learning from the experience of the Lutheran mission churches around the word, especially in Africa (those that came out of era three); some may be our own daughter churches! They also cooperate with the LCMS and other sister churches within the ILC (era two/three) but also with other churches and Christian organization in Sweden and abroad.

“As you can see, in the Mission Province, we are moving in the four different eras of Lutheranism.” They have a distinct challenge as an era-4 Church body in an era-1 setting. They are Lutheran, orthodox, confessional while the Church of Sweden is endrenched in liberalism/politics/Church politics; they are influenced by experience from era 3 churches (especially mission churches in Africa); and learn a lot of things from you here in the Missouri Synod.

Dr. Imberg read from Jude 3: “Dear friends, although I was very eager to talk [write] to you about the salvation we share, I felt I had to [write and] urge you to contend for the faith that was one for all entrust to the saints.” He added: “That is our situation.”

And their future is in God’s hands. “But you must remember, beloved, the predictions of the apostles of our Lord Jesus Christ. They said to you, “In the last time there will be scoffers, following their own ungodly passions.” It is these who cause divisions, worldly people, devoid of the Spirit. But you, beloved, building yourselves up in your most holy faith and praying in the Holy Spirit, keep yourselves in the love of God, waiting for the mercy of our Lord Jesus Christ that leads to eternal life. And have mercy on those who doubt; save others by snatching them out of the fire; to others show mercy with fear, hating even the garment stained by the flesh (Jude 17-23).”

The full lecture provides not only an understanding of these Mission Province churches but also how our history shapes our challenges. Watch (for $20) at www.ctsfw.edu/symposia-live. In other news, Vespers service (followed by an organ recital) will begin within the next 10 minutes.