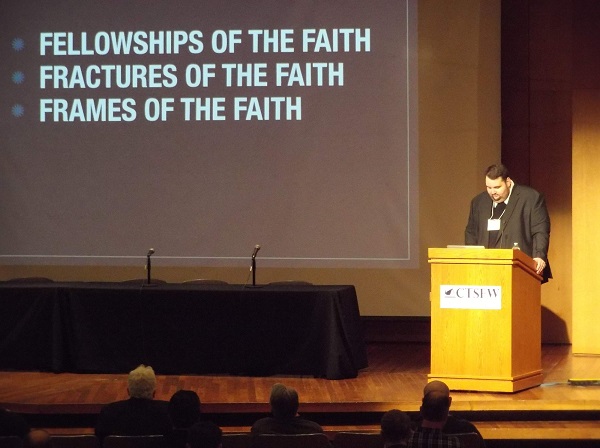 Martin Franzmann is most well-known for his hymns, among them “Thy Strong Word” and “Preach the Word.” Franzmann never considered himself a genius in any sense (he was certainly a committed academic, though he abandoned his pursuit of his PhD in order to serve the Church). He was born on 1907 and died in 1976, retiring from the St. Louis Seminary faculty in 1969, shortly before Seminex. He held that the Word of God must be central in any understanding of theology, stood firmly on biblical inerrancy throughout his life.

Franzmann was never interested in a specific theological school of thought, but what God’s Word had to say. He was a theologian in between—but in between what? Between fellowships of the faith (differing church bodies, Lutheran and non-Lutheran), between fractures of the faith (when our own struggles begin to evidence themselves), and between the frames of the faith (meaning the polarities that should not be; i.e. when orthodoxy and love are set in antithesis to each other, which they should not be).

Franzmann saw the call to the ecumenical, and believe that when you are between the fellowships of the faith, the Word of God must remain central. If the Church lives in obedience to its Lord, the church is not ALSO ecumenical but IS ecumenical; the Church is hidden across the world in a variety of fellowships.

“The Nature of the Unity We Seek”—article written in 1957, came about because of a symposium with different church bodies based on this topic. He spoke from the Missouri Synod perspective; that God has, in immeasureless condescension, drawn near to man; that man should be united in a resolute and total submission in faith to God as He has revealed Himself in His Son, Jesus Christ, in the once for all historic act of His life, death, and resurrection. If we are to hear a Word of God that does not annihilate us, that must be the Word made flesh. The Word must remain central. What sets Missouri apart is the radicalness or stringency in which Missouri conceives of Christ and the Bible as central—no mere whim on our part but the revealed facts of the case in Scripture. We treasure and subscribe to the Lutheran Confessions because they spell out these truths; they are to our minds and hearts the classic response of the Church to the great and inspired Word. They do not, of course, make additional responses superfluous.

From this attitude we approach ecumenical endeavors. Such then is the unity we seek, and we do seek unity. If we have remained aloof (from specific ecumenical endeavors), it is because we have not seen in them any real or divinely given opportunity for unity. One may seek unity by forming a club, or one may seek it by setting standards around which we can gather. We seek this unity in meekness. We are deeply conscious that we hold this standard aloft with frail arms, and strive to hold it more firmly. We would ensure all men that we seek unity not on our terms but on our Lord’s. And that is an act of love.

A church that complacently deems itself above the possibility of belly service is already in danger of serving its belly. Romans 16:17: “I appeal to you, brothers, to watch out for those who cause divisions and create obstacles contrary to the doctrine that you have been taught; avoid them.” Franzmann saw many fractures of the faith in his time, including the walkout at the St. Louis Seminary in the 70s. He did not hide behind his desire for unity and peace, but rather because of his desire for unity and peace strove to bring brothers back together. His churchmanship is evident in his responses to poor or even heretical theology. He did not call out individuals, but rather affirmed and/or challenged specific positions on subjects, with the hope that this method would bring back his brother from his error; to bind the fractures of fellowship in the Missouri Synod.

As always, God’s Word remained central. Here, half-quoted/paraphrased from Franzmann’s words on a Brief Statement: Documents such as a brief statement are functional. They are intended to perform a service, and have validity in worth in so far as they do perform a service. We live in the conviction that the one functioning power in the life of the Church is the Word of God…ask whether the voice of God in the Scriptures has been heard and transmitted accurately. Is the exegetical function broad enough and full enough? Is our document letting Scripture speak on its own terms?

God the Father, light-creator,
To Thee laud and honor be.
To Thee, Light of light begotten,
Praise be sung eternally.
Holy Spirit, light-revealer,
Glory, glory be to Thee.
Mortals, angels, now and ever
Praise the holy Trinity!

This was the final presentation of the 2020 Symposia Series. The second panel discussion (where the presenters of the Symposia on the Lutheran Confessions answer additional questions from the audience) is currently ongoing, and after that daily chapel will begin an hour later than normal at 11 a.m.

Please note that there is far more to this session than presented here. Franzmann was involved, at least peripherally, in Seminex as a former faculty of CSL, having retired the year before Tietjen took up the presidential post at the St. Louis Seminary. He had quite the view on fractures in our Synod. If you would like to hear more, you can still purchase a livestream ticket. While the lectures will no longer be streamed live (having passed), they will be available for re-watching for the next 6-9 months, until they are made publicly and freely available at video.ctsfw.edu. If you don’t like to wait, you can purchase that early access at www.ctsfw.edu/symposia-live.