The Rev. Dr. Rune Imberg, who presented on mission diocese during Symposia last week, led today’s convocation. An ordained minister in the Church of Sweden, Dr. Imberg is also a part of their Mission Province, a religiously conservative group within the increasingly progressive Church of Sweden. In January 2019, Dr. Imberg was barred from practicing ordination as a priest by the Church of Sweden’s Gothenburg chapter (in response to his theological criticisms, particularly in regards to his scriptural stance on the ordination of women), but was re-authorized to participate in ordination services in October 2019 after he appealed and the chapter’s decision was overturned. He was also instrumental in bringing about the partnership between CTSFW and the seminary in Gothenburg, Sweden, through our shared STM Program. 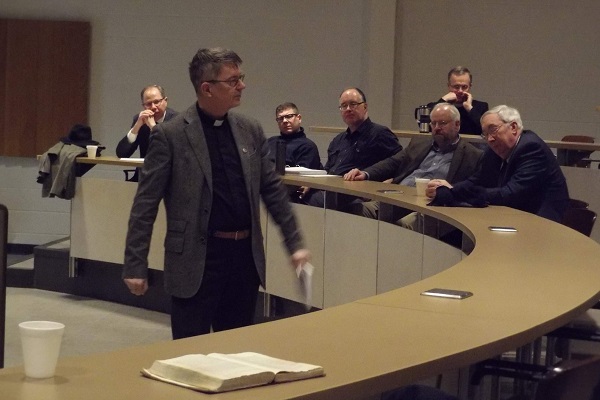 Today’s convocation was on the idea that “history is written by the victors,” especially in regards to one of his brother pastors from the generation before him: Bo Giertz, most famous among English-speakers for his book, “The Hammer of God.” Bo Giertz was a Swedish theologian, novelist, and bishop of the Gothenburg Lutheran Diocese from 1949-1970 (ordained in 1934).

“He was a rather impressive person,” Dr. Imberg said of the bishop. “If you have met Bo Giertz, you remember him through the rest of your life.” He was a person who could mesmerize people, he had a dozen honorary doctorates, and was brilliant in a number of ways. He had charisma and was an incredibly popular preacher. Even into his 80s he was preaching 300 times a year—always to a crowd of at least two or three hundred. When people knew he was going to preach, they wanted to be there. “He was like a renaissance priest,” Dr. Imberg explained. He was, in many ways, a winner.

But he was also a loser. The Church of Sweden has spent most of its history as a state church, and through history has adapted culturally to the times. Bo Giertz, despite his brilliance and his popularity, was ultimately punished for his adherence to God’s Word as the highest authority. Parliament didn’t like that. When he became a bishop, a medical doctor attacked him for a confirmation class book he wrote in 1943, writing to the civil authorities to have the book (which has been translated into multiple languages) scrutinized, claiming that it was dangerous—psychologically damaging to children. In 1958, the Church of Sweden voted to begin ordaining women; Bo Giertz stood by Scripture, and ended up on the losing side. Though he should have been up for archbishop over the church, at that point it was out of the question. In fighting these issues, he lost.

In 1970, when he was 65, he could see that his way of thinking had been abandoned by the Church of Sweden. In the 80s, he said, almost crying, if he was a student now he would never have become ordained. He was liked and loved by many people, and would remain one of Sweden’s two most famous bishops. But he lived to see his church body stray so far afield that, given a different time period, they never would have even accepted him as a priest.

Around this same time (1972, to be exact), he wrote a short novel called “The Knights of Rhodes.” The historical novel was based on very real events following a few centuries after the crusades (which, as Dr. Imberg quickly explained, were a kind of Christian defense against Muslim occupation of Christian territories). In 1522, several thousand Christian forces left on the island of Rhodes were besieged by 100,000 Muslim forces in the command of Sultan Suleiman. Outnumbered 20 to 1, six months later they lost, forced to surrender.

Dr. Imberg explained that the first third of the novel can be difficult to get through—complicated and even boring. It is a book about a hopeless fight, which will soon be lost. “But then you realize what it is doing,” he said. Bo Giertz used the novel to subtly teach the theology of the cross. There is a question at the heart of the book: what is God doing when everything seems to be going in the wrong way for Christians? “This is the thing which is called the hidden work of God.”

“There are many pieces to keep them busy.”

“And precisely for that reason, it is so hard for us to follow the game. Occasionally, God makes a move that we can’t understand. In order to check something only he sees coming. Or to get into a position only he can exploit. Up until the end all the small pieces stand together trying to discern what is happening in the big scheme of things.”

We look at horror, terror, and loss, and ask God how he could let this happen. How can he allow war? Why was this father of three paralyzed in an accident? Why did this two-year-old die of cancer? “And of course from our perspective it is terrible, but there are two more perspectives,” Dr. Imberg said, listing the reasons: “It can never be bad to die to come to heaven to be with God… [and] perhaps God needed to do that, perhaps he knew something else would have happened. This is a book which deals with the big questions in a subtle way.”

Another excerpt from “The Knights of Rhodes”:

“But first, Brother Grand Master has to be ready for that which the Savior gave him last time.”

The Grand Master looked curiously at his chaplain.

“To allow myself to be led to where I did not want to go? I am ready for that. I am willing.”

“For what Brother Grand Master? To die?”

The Grand Master was quiet and the priest continued.

“To continue—despite everything? To believe without seeing? To go into the darkness with God—only God?”

The Grand Master was the grand loser. He did not die in the siege; rather, he was called to lose. And in losing, in successfully negotiating a retreat for himself and his men, years later these forces (under another Grand Master) would defeat the Ottomons for good, halting their progression into Christian territories. “They prepared the way for a later victory,” Dr. Imberg pointed out.

That is also the legacy of Bo Giertz and all those who fight a good fight that we may appear to be losing in the here-and-now. Dr. Imberg put it this way: “We are fighting a fight against a lot of things—media and public opinion and politicians and a lot of things—and you are having the same fights in United States. I am quite certain, at least I suspect, that God is using that fight to prepare for forthcoming victories (in a spiritual way).”

Out of Bo Giertz’s own defeats in the 1940s and 50s would come this book that speaks quietly and teaches subtly about the theology of the cross. For Dr. Imberg, “The Knights of Rhodes” serves as a mirror to the state of things in the Swedish church today. For us, we can recognize our own hopeless fight and the battles we lose every day in our own country.

But we don’t have the long view. So we trust in our Lord and Savior and can, with full assurance and comfort, answer the question: is history written by the losers or the winners?

Yes, dear brothers and sisters in Christ. Of course it is.